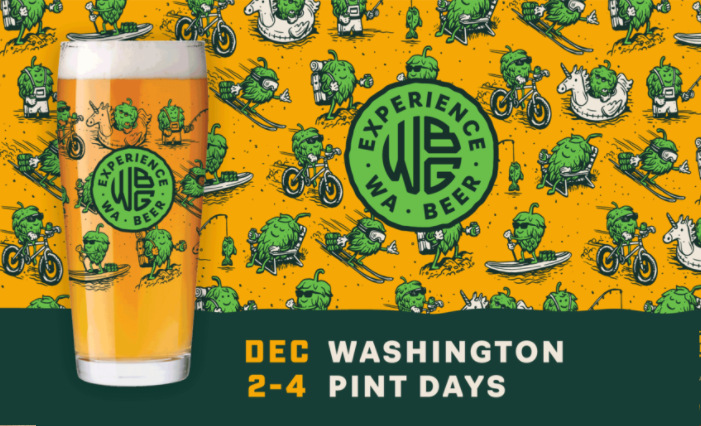 All weekend long, it’s gonna be a big ol’ Washington beer love fest. December 2nd through 4th, there are a couple of ways you can show your appreciation for our local breweries. More specifically, a couple ways for you to enjoy some great beer while supporting the Washington Brewers Guild.

More than 70 participating breweries and businesses purchased special Explore WA Beer glassware and will make it available to you via various special offers and promotions. Basically, “keep the glass” deals. Last year, the Pint Days event was very popular. Most places ran out of glassware pretty quick. Make your plans now!

The second-annual Washington Pint Days event is your chance to score a very cool commemorative pint glass. All you need to do is visit one of the participating breweries and businesses and drink beer. The list of participants and all the other pertinent info is below:

This custom glassware is the 16 oz. Libbey Willi Becher pint featuring “Experience WA Beer” themed graphics created by Blindtiger Design, a local creative, strategy, and marketing agency specializing in the unique needs of the craft beverage industry. Blindtiger Design is a creative partner for many of the brewery brands you recognize.

The goals of WA Pint Days are to encourage beer enthusiasts to get out and visit Washington craft brewery taprooms, and raise money to support our Guild.

In partnership with WA Brewers Guild member breweries and Grandstand, $1 from every glass will be donated to the WBG. WA Brewers Guild, is a grassroots organization that fosters a sense of community among the state’s breweries and also does the increasingly critical work of representing the brewing industry’s interest in Olympia. Additionally, our guild has been extremely active providing advocacy and education for WA breweries during the COVID-19 crisis.

So, bundle up and visit your local Washington craft brewery to celebrate WA Pint Days!