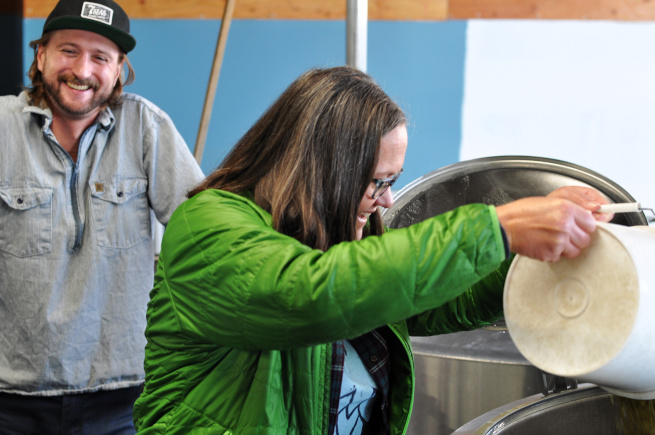 The Washington Beer Blog teamed up with 7 Seas Brewing to create a beer to commemorate our shared anniversary. Celebrate with us by drinking it or by putting it on tap at your bar. Here’s the story. (Above: Kim executing one of the hop additions as Travis oversees.)

You don’t often hear about people celebrating the number 13, but the Washington Beer Blog recently enjoyed its 13th anniversary and we’re in a mood to celebrate. Since launching in October 2008, we have published 5,636 stories. This post is number 5,637.

Thirteen years ago, we published our 13th post. It was about a new brewery poised to open in Gig Harbor: 7 Seas Brewing Gets Closer to Setting Sail. To reiterate, that was post number 13. We have always loved sharing news of coming-soon breweries. 7 Seas was the first coming-soon brewery we told you about that still exists today. (Now-closed Naked City Brewery, just in case you’re wondering who was first.)

Not long ago, Kim and I decided that we wanted to brew a 13th-anniversary beer. When we started thinking about who might be our brewery partner for the endeavor, we immediately thought of our friends at 7 Seas Brewing. You see, the Blog and 7 Seas have enjoyed a sort of kinship over the years. Not just because our businesses are roughly the same age, but because we like each other.

While 7 Seas Brewing will celebrate its actual anniversary in a few months, it was 13 years ago that we posted one of our first stories, a story that introduced Mike Runion, Travis Guterson, and their plan to open a brewery in Gig Harbor. In that sense, we share an anniversary.

Winter IPA is not hazy. It is not juicy. We gave the beer a significant malt backbone upon which to pile heaping portions of hops: multiple additions of classic hop varieties–Nugget, Centennial, and Cascades.

We didn’t stop there. Winter IPA is generously dry-hopped. We waited for the beer to reach terminal gravity (finish fermenting, basically) and then sampled a bit. Upon tasting the beer, we decided to dry-hop the it with Amarillo and Centennial.

How to Get the Beer

Winter IPA is a beer designed for the season. It will find its way onto draft menus around the Seattle-Tacoma area shortly after Thanksgiving. We will publicize exactly where you can get it as the beer roles out. This is a draft-only product. We invite you to join us in celebrating our anniversary by enjoying a pint or two of 7 Seas Winter IPA.

If you want to put it on tap and help us celebrate our anniversary that way, we will publicize that too! Just let us know (kjones@washingtonbeerblog.com), or reach out directly to 7 Seas Brewing (pete@7seasbrewing.com).