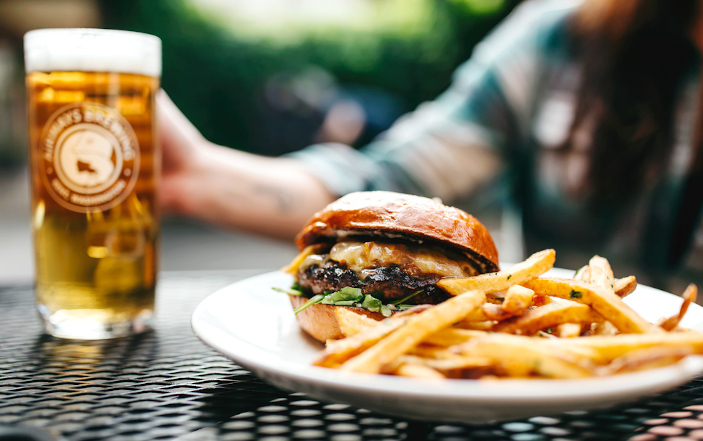 The Airways Brewing Bistro & Beer Garden in downtown Kent is about to commemorate an important anniversary. In a world where so many restaurants and bars come and go so quickly, the Bistro & Beer Garden has delighted the city’s beer and food lovers for a decade. To mark the occasion, they’ve planned some special offerings — November 5th thru 7th. What’s more, they just announced some big changes coming to the Bistro & Beer Garden. (Photos by Darren Zemanek Photography.)

The short version, they are upgrading the uber-popular outdoor space. The patio improvement plans include a permanent covering, built-in heaters, new planters, a walk-up window, and more. All this is happening with the help of the building’s owner, Raven Commercial Real Estate.

Recognize that these changes, and this anniversary, involve the Airways Brewing Bistro & Beer Garden in downtown Kent. The Airways Taproom and Brewery across town marked its 11th anniversary in March.

Here is the official announcement about the upcoming celebration and expansion:

With the business milestone comes the announcement of plans for an expanded patio, set for completion in spring 2022.

“People enjoy our outside space, so we’re remodeling to make it even more comfortable and convenient,” said Dione Dittmar, co-owner and general manager. “We’re adding a small kitchen with a walk-up window and a permanent cover adjustable for year-round use, among other things.”

Dittmar said the walk-up window will offer smoked and grilled items—convenient for people attending events at nearby accesso ShoWare Center and other downtown entertainment.

At the anniversary event Nov. 5-7, guests can enjoy all-day happy hour items and complimentary dessert with a purchase. A birthday cake martini and other specials will be available for purchase.

A new happy hour menu and seasonal menu options continue to focus on the in-house smoked meats and upscale bar fare the bistro is known for. Among the new food items are:

Per the recent King County COVID-19 requirements, Airways will check for proof of vaccine or a negative COVID-19 test for indoor dining.