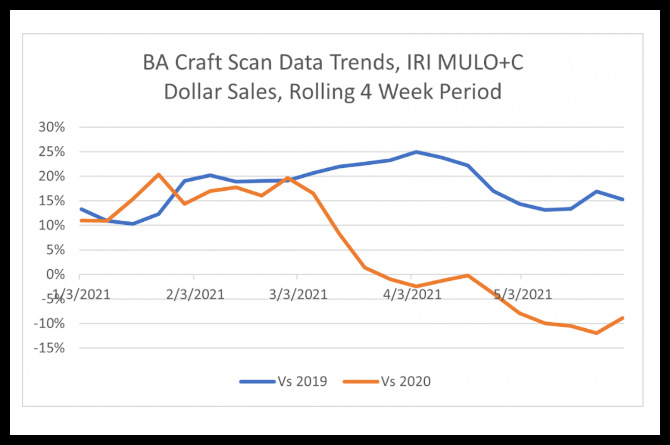 Things are not always as they appear

I don’t suspect a lot of you read press releases about things like beer scan data. That’s why I’m here. In fact, I bet some of you don’t even know what scan data is. In simplest terms, scan data tracks retail purchases at places like grocery stores, convenience stores, and liquor stores. Obviously, it’s used in all sorts of industries to track retail sales, including beer sales.

Recently, reports about scan data have sent shivers through the craft beer world. Data shows that craft beer sales have dropped significantly. (For May 2021 vs May 2020, in particular.) This has created a bit of concern in the beer world and some folks are quick to interpret this information in the most negative light. The Washington Beer Blog is, on the other hand, a “the keg is half-full” kind of publication.

The sky is not falling! Yes, scan data shows that craft beer sales have dropped, but we cannot look at that data in a vacuum. As with so many other things in our modern, complicated world, it is folly to over-simplify the situation and look for simple, easy answers. Maybe you’ve already solved the riddle of the scan data.

According to Bart Watson, Chief Economist for the Brewers Association, the precipitous drop in retail sales, as revealed by scan data, is just a reminder that 2020 was not a normal year. According to Watson, reporting scan data versus 2020 may not, in fact, really provide that much context for the beer category or the sub-categories within the beer category.

Watson says, “Taking a step back and remembering what scan covers and where it fits into the overall picture, I think it quickly becomes clear that we shouldn’t read these numbers in a vacuum, with little to no context as to why they might be that way, and that it’s quite plausible that for many brewers, a weak year-over-year May in scan for craft is actually a really good sign.”

In his report published on the Brewers Association website, Watson points out that when compared to 2019, and not 2020, this scan data shows that craft beer sales are up 15 percent. As important, he points out that all of this information needs to be viewed in context and we should not ignore the fact that many craft breweries rely on on-premise sales and not just off-premise sales. Notoriously, 2020 was a tragic year for on-premise sales as restaurants, bars, and brewery taprooms across the nation were shuttered because of the pandemic.

“In normal times, growth in scan showed something (though not everything) about sales trends that could reasonably be compared over time,” says Watson. “But as we saw in reverse in 2020, much of what we were measuring last year was how much of the volume lost from bars and restaurants was flowing into packaged volume at grocery, convenience, and liquor stores.”

“This year is the reverse. That means for most breweries, all of this doesn’t really matter until we understand how this interacts with the on-premise.”

If you’re looking for bad news in all of this, think about all of those breweries that put so much effort into packaging their beer for retail last year. Now, that sales stream is suffering. That is true, but many of the breweries that pivoted in that direction did not do it in any kind of permanent way. The beer that was going into aluminum cans last year can just as easily go into stainless steel kegs this year.

Blame Me and Yourself

Yes, we all bought a lot of beer at off-premise retail sites last year. We had no choice. Where I live, the local grocery stores did an admirable job of upping their craft beer game to meet the demand. A remarkable number of breweries responded to the situation and canned their beer for the first time and somehow managed to get it onto the shelves at local retailers. You, like me, probably spent more money on grocery-store beer in 2020 than you did in 2019. A lot more. Unquestionably, I will spend a lot less in 2021.

You, me, and probably every craft beer consumer in the nation is excited to get back into brewery taprooms and back into the kickass beer bars we love. Shielded by the vaccine, surrounded by uninfected people, we have dollars to push across the bar in exchange for pints and pitchers. Growlers and crowlers are out there at brewery taprooms waiting to be filled with brewery-fresh beer.

“The latest Nielsen CGA survey numbers suggest this might be the case, showing 38 percent of consumers plan to go out for a drink in the next two weeks (June 4-7),” says Watson. “That number a month ago (May 7-10) was only 25 percent. We don’t have sales numbers to back up those surveys, but if draught volumes see an increase of 50 percent relative to the latest numbers, that’s going to be a net positive for many brewers, even with these scan numbers.”

Bart Watson, Chief Economist for the Brewers Association, is a stats geek, beer lover, and Certified Cicerone®. He holds a PhD from the University of California, Berkeley, where in addition to his dissertation, he completed a comprehensive survey of Bay Area brewpubs one pint at a time. You can follow him on Twitter @BrewersStats.

Aluminum can crunch is about to hit brewers & consumers where it hurts
The 2021 U.S. Hop Crop Report
Icicle Brewing's Pamela Brulotte earns national recognition
How excited are beer consumers for fresh hop season this year?
sponsor