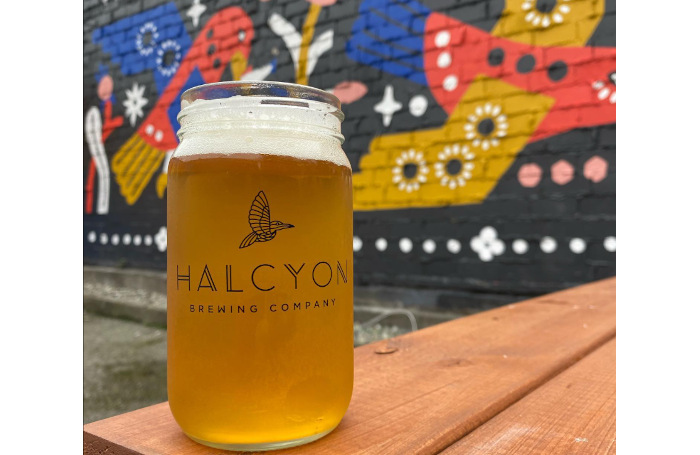 Halcyon Brewing recently announced that it will start pouring beer on Friday, October 22 at its brewery and taproom in Seattle. They have at least one house-brewed beer for you to try. Follow them on Instagram and Facebook to stay informed. We originally introduced you to this new brewery last month in this post.

This new brewery is opening in a familiar location: the former home of Naked City Brewery in the Greenwood neighborhood. New ownership and some new brewing equipment, same location near the corner of Greenwood Avenue and North 85th Street. Another change, thus far there’s no mention of a kitchen, just “beer snacks.” Naked City offered a full menu.

I should point out that it was exactly 13 years to the day that Naked City opened for business at this location. At first, operating as a taphouse with the beer brewed offsite, but eventually a full-blown brewpub. I digress.

Same expansive beer garden, new mural on the wall. As the picture at the top of the post shows, and as our previous post mentioned, the popular mural painted by noted local artist Henry has been replaced. The happy walrus imagined by Henry apparently no longer impressed the neighborhood’s taggers who vandalized it multiple times. The new art was provided by Stevie Shao, an up-and-coming local artist.

The folks running the show at Halcyon Brewing are no strangers to the local beer biz. Matt Hipp is one of the owners of the Broadview Taphouse, which is not too far away from the new brewery. Co-owner Tom Furey is perhaps best recognized for his work brewing beer for Chainline Brewing and Standard Brewing.

Beyond this Friday’s opening, the brewery will eventually offer 14 Halcyon taps plus cider and wine, all served in a family- and dog-friendly space. The ownership group brings a multi-cultural component as well, so look for some Japanese and Taiwanese influences.

The announcement about this Friday’s opening came without fanfare. A simple message on Instagram and Facebook said, “We just tapped a keg from our first batch and this pale is tasting great – you can try it on Friday, October 22nd!” Keep an eye on those channels for more details.