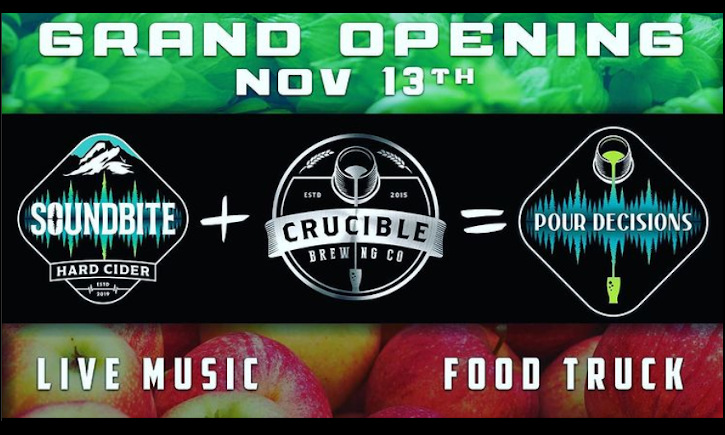 The Crown Hill neighborhood is located in northwest Seattle. For the unfamiliar, think of it as North Ballard or West Greenwood. This Saturday, November 13th, Pour Decisions celebrates its grand opening at the corner of NW 80th Street and 15th Ave. NW (map below). The new business is a joint taproom venture, offering beer from Crucible Brewing and cider from Soundbite Cider. (Images from Instagram.)

The two businesses, which are neighbors in Everett, are now partners in Seattle. Pour Decision is located in the space that previously housed The Dane, a cafe and bar that was known for its beer, coffee, and kid-friendly activities. The Dane closed down about six months ago. Pour Decision is dog friendly, but is currently a 21+ establishment (they hope to change that in the future).

Pour Decisions has been softly open, with limited hours, for a couple of weeks already. Now they’re ready to get rolling full-time. This Saturday’s event includes live music and food from Alaskan Dumplings food truck.

“We can’t wait to switch to our New Hours and get this thing going for real,” said a statement on Facebook. “Our new neighbors and patrons have been incredibly supportive and kind during our Soft Open and we are looking forward to getting to know everyone better in the coming weeks, months and years.”

Here are the details of Saturday’s grand opening soiree:

Other Things to Know:

To see our reports about other recent Washington brewery openings, click here.