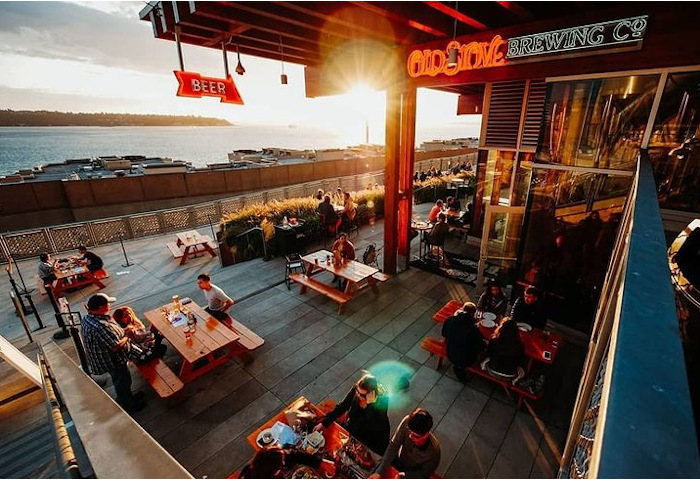 With new rail stations now open, we link you to good beer up and down the line

Last Saturday marked the opening of three new Link light rail stations. With this latest extension, North Seattle now has access to the region’s slowly expanding light rail system. Great for commuters, but also of value to beer tourists. (Image above via Instagram.)

Below, I introduce some of your options for exploring the Seattle beer scene via light rail, sharing information about notable beer destinations within approximately 0.5 miles of each station I mention.

Cozy is a good word to describe the taproom, which is basically built within the brewery. It’s a popular neigborhood hangout that can get pretty busy, but it’s worth squeezing in where and when you can. Brewery with taproom, no kitchen. Kids and dogs are welcome. 5041 Rainier Ave S #106, Seattle.

Back before Seattle was freckled with world-class breweries and beer-centric bars, there were a handful of casual neighborhood alehouses that offered up a great selection of craft beer alongside reliably tasty pub grub. This was one of them. After 20 years, it remains a stalwart beer destination. Full menu. Kids welcome, dogs are not. 4914 Rainier Ave S, Seattle, WA 98118.

When you sidle up to the bar, know that you are likely the only person in the place who does not live within walking distance of this beloved neighborhood pub. Don’t worry, the locals are friendly. Expect to find a fierce dedication to good beer to accompany tasty, straighforward fare rolling out of the kitchen. Free, fresh popcorn. Kids welcome, dogs are only allowed on the patio around the back. 3315 Beacon Ave S, Seattle, WA 98144.

In addition to its house-brewed beers, Perihelion Brewing serves up a meaty menu of really tasty food, including a mind-bending burger (the Beacon Burger). Quite literally, right across the street from the light rail station. Kids welcome, dogs allowed on the patio only. 2800 16th Ave S, Seattle, WA 98144.

They call it miniature golf, and it’s different than putt-putt golf. Kind of. That’s the focus here, along with a huge selection of Washington-brewed beers on tap. They invented the sport and built all the games themselves. Food in the form of tacos is usually available. Dogs are allowed, but kids are not. 240 2nd Ave S, Seattle, WA 98104. (Flatstick Pub has other locations; this is the Pioneer Square location.)

It’s an offline kind of place. You won’t find much about Collins Pub online or via social media. Old school. They shut down for the duration of the pandemic but recently reopened. Not just great beer, but also tasty food that goes beyond typical pub grub. It’s just a few steps away from the station. 526 2nd Ave, Seattle, WA 98104.

This is one of Seattle’s original breweries and over the years it has earned, and maintained, a well-deserved reputation in the world of craft beer. It is an absolute must if you want to experience the breadth and history of Seattle beer. Part of the Market neighborhood since 1989, in its current location since 1996, you’ll find it right next to Pike Place Market. Full-service pub with great food. Kids welcome, no dogs. 1415 1st Ave, Seattle, WA 98101.

Located in a recently completed expansion to Pike Place Market, this brewery enjoys an amazing view of Puget Sound and the Olympic Mountains. A spacious patio (pictured at top of this story) and ceiling-height, west-facing windows let you take it all in as you enjoy a cold one. Award-winning beers, great food, family-friendly, no dogs. 1901 Western Ave, Seattle, WA 98101.

To call this brewery “award-winning” is a gross understatement. Since opening in 2016, Cloudburst has taken the world by storm and maintained a lofty reputation. (Storm. Lofty. See what I did there?) What’s the secret ingredient at Cloudburst? Whimsy. No food at this no-frills taproom, just beer. No kids either, but well-behaved dogs are welcome. (This is the downtown taproom. They have another taproom across town in the Ballard neighborhood) 2116 Western Ave, Seattle, WA 98121.

This place is gorgeous! And big! The brewery is an active member of the local community, and its taproom serves as a neighborhood hub where friends, strangers, and civic organizations gather to solve the world’s problems, or at least try. As the name implies, they really are brewing optimism. Oh yeah, and they have beer. Food trucks often. Kids are welcome and so are dogs. 1158 Broadway, Seattle, WA 98122.

This is where it all began for Elysian Brewing back in 1996. A lot has changed since then, but this place remains the same. Sure, a recent remodel spruced things up quite a bit, but the brewery’s flagship location is essentially the same as it ever was. Full menu. Kids are only permitted in the smallish, front section. Dogs are welcome outside when the weather allows for sidewalk seating. 1221 E Pike St, Seattle, WA 98122.

When it opened in 1988 it was the first brewpub to open in Seattle since Prohibition. The Big Time manages to mark time without being trapped in it, remaining a relevant and vital part of the local brewing scene. The brewery cranks out exceptional beers to accompany pizzas, burgers, sandwiches, and other pub grub. Dogs are okay outside but not in. Now family-friendly for the first time ever. 4133 University Way NE, Seattle, WA 98105.

Previously, this was the home of Floating Bridge Brewing. Now with new owners, the brewery and taproom will re-open soon. At the time of publication, beers are in the tanks and the grand opening is imminent. 722 NE 45th St, Seattle, WA 98105.

Friendly and immediately familiar, comfy as your favorite flannel shirt, the pub referred to simply as The Latona endures. Comfortable in its own skin, smiling quietly as the world goes by, Latona Pub has served good, local beer since 1987. It still excels at the practice. The kind of place you cannot help but adore. Full kitchen. No kids or dogs. 6423 Latona Ave NE, Seattle, WA 98115.

It’s an upscale, all-ages sports bar with exceptionally good food, craft cocktails, and a lovingly curated tap list. It’s a great place to catch a game or get a beer and a meal. Sports bar yes, Bud Light no. The original Westy is in West Seattle, but this one is in the Roosevelt neighborhood, hence the name. About a half-block from the Roosevelt Station. Kids are welcome, dogs are not. 1215 NE 65th Street, Seattle, WA 98115.

They refer to the tasting room as the Alley Tavern and that makes sense. It is in an alley, between Roosevelt Way and 9th Ave. NE. This diminutive brewery taproom is beloved by the neighborhood. And why not? A garage, an alley, a neighbor making and selling beer. Very, very Seattle. 916 NE 64th St, Seattle, WA 98115.

The beer selection is always superlative, the pizza is creative and delicious, but don’t overlook the outstanding salads on the menu. The Northgate Mall area has changed drastically in recent years and, to be honest, most of the changes were for the better. For example, the addition of this kickass beer joint. If you are headed up to the Seattle Kracken practice facility, this is the beer and food outlet you should not miss. Kids yes, dogs no. 10104 3rd Ave NE, Seattle, WA 98125.

Beyond the Seattle Beer Scene

Admittedly, the local light rail line around Seattle doesn’t offer the broadest scope of options. Our region is pretty late to the rail-transit game. If you are looking for more beer travel options around Washington, we have maps of local breweries all across Washington, including one specifically dedicated to all of Seattle’s breweries and top beer destinations.