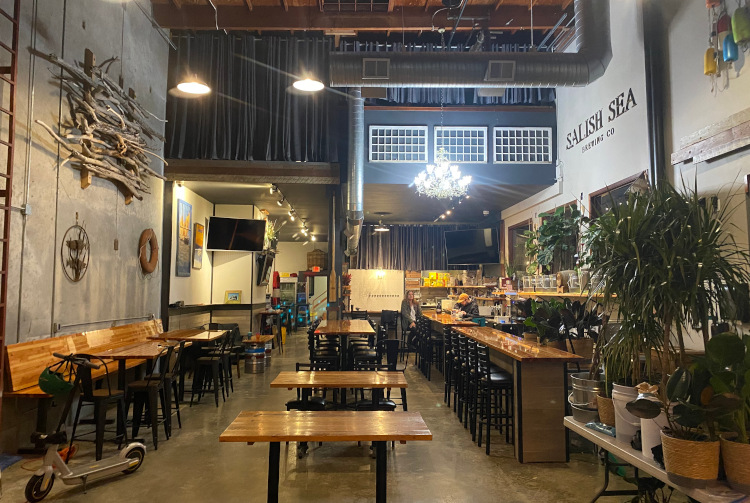 The end of one journey marks the beginning of another. About a year ago we shared the news that American Brewing Company was shutting down its brewery in Edmonds, Washington. This marked the end of American’s circuitous, uncommon, 10-year voyage through the craft beer business (more details here).

Soon after that news broke, we learned that Salish Sea Brewing was taking over the American Brewing location in Edmonds, with plans to open a brewery, taproom, and eatery. This new location, dubbed The Boathouse, marks a second location for Salish Sea Brewing, with the brewpub in downtown Edmonds remaining open. The brewing equipment has been moved down the street and absorbed into the larger brewery, but the brewpub will continue to have a small-batch brewing system.

Not only a new, second location but also new brewing equipment and an increase in brewing capacity. Two locations in Edmonds: The Salish Sea Brewpub downtown and the Salish Sea Boathouse near the waterfront. Like the Brewpub, the Boathouse is family-friends, though dogs are only allowed outside in the beer garden.

For those who remember American Brewing’s taproom, the space will seem familiar but different. Salish Sea Brewing’s owners, Jeff and Erika Barnett, along with their crew, have put a lot of work into sprucing up the taproom, giving it a lot more than a fresh coat of paint. They constructed a new kitchen, crafted new furniture, remodeled the bathrooms, installed a new cold room, added a new draft system, created original artwork, potted plants, hung curtains, and yeah… you’ll hardly recognize the place.

Outside the rollup door, the beer garden is coming together and showing a lot of promise. It will provide a spacious, outdoor option. Year-round, as weather allows. Also, they’ll host live music in the beer garden. Because The Boathouse has a kitchen and serves food, and must abide by health department regulations, dogs are only allowed outside.

At first, probably only open four days per week: Thursday through Sunday. For the opening, the tap selection should include as many as 12 house-brewed beers. Along with that, they’ll offer a selection of beers from other local breweries, wine, cider, and root beer. The Boathouse will offer a food menu focused on small plates and snackable items; you’ll find a more robust menu up the street at the brewpub.

The Salish Sea Boathouse is poised to open in the coming days. “Next week,” is what I was told. Keep an eye on Salish Sea Brewing’s Facebook page to find out exactly when the beer starts pouring and get more details about hours of operation and so on. Expect a formal grand opening announcement sometime next month when Salish Sea Brewing celebrates its anniversary at both locations.

Salish Sea Brewing Boathouse
180 W Dayton St.
Edmonds, WA 98020
It is in the same building as Gallagher’s Where-U-Brew, but around the side/back.