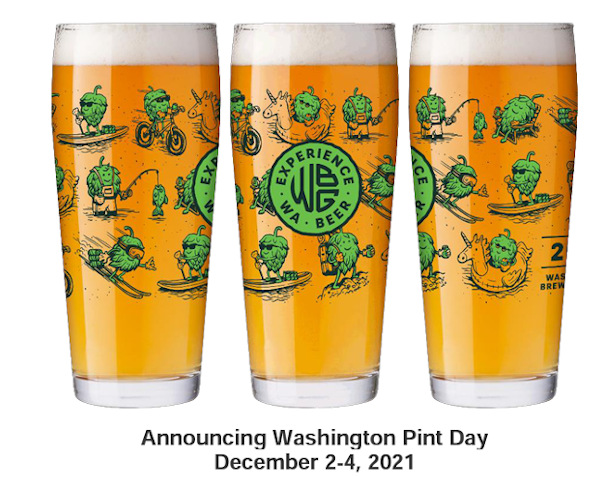 Last year’s Washington Pint Days promotion was very well received. The artwork on the glassware was a hit with local beer fans and most of the participating breweries quickly sold out of the Discover Washington Beer pint glasses. The program, a fundraiser for the Washington Brewers Guild, is back for a second year. This year, Washington Pint Days is slated for December 2nd thru 4th.

Breweries (Washington Brewers Guild members), it is time to sign up and order your glassware. More details about the program can be found here. Get your order placed by the end of October to participate.

Consumers, all you need to do is visit one of the participating breweries and purchase a pint. Each participant will do their own thing, offer their own way of getting you into one of these keepsakes – “Experience Washington Beer” pint glasses. Keep an eye out and know that we will share the up-to-date list of participating breweries as the date nears. Like last year, the artwork was designed by Blind Tiger Design and is sure to attract the attention of local beer lovers.

Here’s the recent announcement from the Washington Brewers Guild:

Register Now to be a WA Pint Days Participating Brewery

Washington Pint Days event is back! The goals are to encourage craft beer enthusiasts to get out and visit WA craft brewery taprooms, raise money to support our Guild, and sell a lot of beer for brewery members!

Purchase special limited-edition glassware and $1 from every glass purchased goes directly to our guild. Then, participate in WA Pint Days on December 2 – 4. You set the specials for glassware and we’ll help drive traffic to participate breweries.

Thank you to the following breweries that have already purchased glassware – let’s keep this list growing!