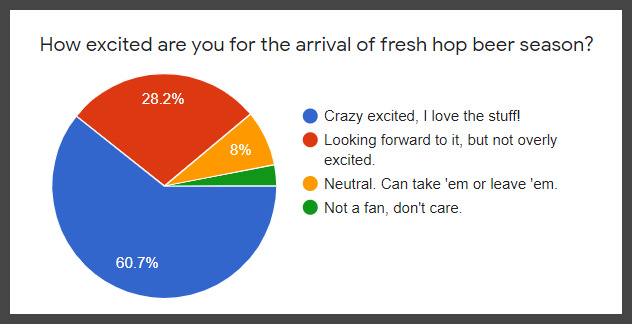 I’ve been running a reader survey on the Washington Beer Blog regarding fresh hop beer. It’s still up there collecting data from the public, but enough people have responded now that the results are flattening out and it seems the trends are set. The results provide some insight into the minds of the beer consumer as fresh hop beers begin to hit the market.

As the results below will show, y’all are pretty damned excited and you plan on making efforts to find and drink fresh hop beer. I should note, this survey only measures responses from the Washington Beer Blog’s audience and not the general beer-drinking public; therefore, we can assume that the respondents are exceptionally well-informed, intelligent, and really good-looking.

And the Survey Says…

I asked you to grade your understanding of the term fresh hop beer on a scale of 1 to 10, with 1 meaning you are clueless and 10 meaning you’re an expert. Better than 86 percent of you gave yourself a 7 or higher, with the highest number of respondents giving themselves an 8 out of 10.

The takeaway? This was not a test, so this has nothing to do with how much you really know; rather, it tells us how much you think you know. That was the point of the question.

Next up I asked how excited you were for fresh hop season this year. This included an option for those who are not at all excited and are generally uninterested.

As shown, a healthy majority of you said you are either “crazy excited” or at least “looking forward” to fresh hop season. That means over 88% of you are in some way looking forward to it.

What Are You Doing?

The choices were, and you could pick all or any that apply, were:

The takeaway? I think the results speak for themselves. First and foremost, breweries need to make sure their fresh hop beer is on tap at the brewery. Share news of its availability on social media. Package it in bottles or cans if possible.

A Rose by Any Other Name

I love this one. I’ve gone back and forth over the years with professional brewer friends who argue that it should be called wet hop beer instead of fresh hop beer. I am of the opinion, admittedly, that fresh hop makes more sense because getting into the nitty-gritty makes consumer’s eyes glass over. The actual question was, “Given your current understanding of the process and the product, which term do you think is more accurate or better descriptive?”

Personally, I think using the term wet hop fosters confusion. Everyone has heard the term dry hop. Whether you know what that term actually means or not, throwing out a new term that is completely the opposite of dry hop, just muddles things up a bit too much. Many fresh hop beers are actually dry-hopped with wet hops. Does that make them fresh dry-hopped or dry fresh-hopped? And if you put them in beer, aren’t all hops wet hops? Yikes. Fresh hop beer is simple.

The takeaway? Whether you favor the word fresh or the word wet, we all know what we’re talking about. A rose by any other name does in fact smell as sweet.

Conclusion: I am happy everyone is excited for fresh hop season this year. I hope you have a lot of opportunities to get out there and find some of it. In the coming weeks, I’ll do my best to make sure you know where and when to find it. Follow me on social media, where I’ll share what I know.

Aluminum can crunch is about to hit brewers & consumers where it hurts
Introducing our anniversary beer: Winter IPA by 7 Seas Brewing
2021 Washington Beer Awards winners announced
Georgetown Brewing - Bob's coming back and other stuff you should know
sponsor