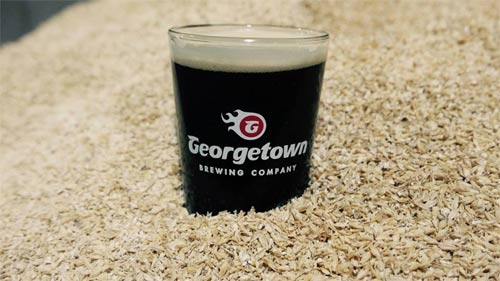 On Saturday, May 11th, Georgetown Brewing releases this year’s batch of Bob’s Beer, aka Bob’s Brown Ale. The release party takes place at the Nickerson Street Saloon (as it always has) at 3:00. Below I share the story behind this uncommonly philanthropic beer. Keep an eye out for other Bob’s events, and for Bob’s Beer in general, following the release.

The release event happens in the midst of the 11th annual Seattle Beer Week celebration, but this beer and this release party actually predate that event. The story behind Bob’s Beer actually predates the founding of the brewery that brews it. We’re talking about the early 2000s. Georgetown Brewing is tight-lipped and not at all self-aggrandizing about it, but this year Bob’s Brown Beer will top the $1 million mark. That’s how much they’ve raised for Ronald McDonald House.

Here’s the story behind the beer, as I wrote it for Sip Northwest magazine back in 2013.

There is nothing inherently remarkable about brown ale. Even at its very best, brown ale is not considered a sexy or adventurous style of beer. Still, beer lovers flock to the Nickerson Street Saloon every year on a Saturday in May for the official release of Bob’s Brown Ale, a philanthropic brew from Seattle’s Georgetown Brewing Company. Manny Chao will be there, hoisting a pint of the beer he designed to honor the memory of his friend Bob Hirsch.

Most craft beer fans around Seattle only know one thing about Manny: the beverage bearing his name, Manny’s Pale Ale, is Seattle’s most ubiquitous craft beer. You’ll find Manny’s name on tap handles and coasters at hundreds of pubs, bars and restaurants around Seattle. His name is iconic on the local beer scene. His Pale Ale is the Space Needle of Seattle craft beer.

What most people don’t know is that before the cofounder of Georgetown Brewing began brewing what would become Seattle’s beer, Manny worked as a counselor at a camp for kids with cancer. That’s where he met a young camper who would have an indelible impression on him. The two became friends and Manny drew inspiration from the courage with which Bob Hirsch fought for his young life.

For years, Bob travelled with his family from their home in Alaska for treatment at Seattle Children’s Hospital. Like many families with children treated at the hospital, Bob’s family stayed at Ronald McDonald House, a home away from home for families facing the direst of circumstances. The philosophy is simple—children heal best and most wholly when their parents are nearby.

Bob lost his brave battle with cancer shortly after his 21st birthday. Soon thereafter, Bob’s brother suggested that Georgetown Brewing name its next beer after Bob. Although Manny thought that was a fine idea, he had something better in mind: a philanthropic brew honoring his friend, with the brewery donating all proceeds to Ronald McDonald House.

Each year on Bob’s birthday, May 14, Georgetown Brewing releases Bob’s Brown Ale (draft only). The brewery organizes a few events in addition to the release party, but for the most part the beer does all the work, benefiting the cause with every pint and pitcher poured. This year Georgetown will brew at least 100 barrels (200 kegs) of Bob’s Brown Ale and serve it at 160 locations, mostly pubs and bars in the Puget Sound area.

This marks the ninth year of the Bob’s Brown Ale project. To date, the beer has raised over $330,000 for Ronald McDonald House Charities of Western Washington and Alaska. By the time the 2014 batch runs dry, which usually only takes a few weeks, that number will exceed $400,000.

“Bob would be proud,” says Manny. “Wherever he is, he’s grinning big knowing that the beer he inspired is helping so many people and bringing so much pleasure to our beer bellies. Everyone that is involved—from making Bob’s, to selling it, to drinking it—is giving back to our community. It’s pretty dang cool.”