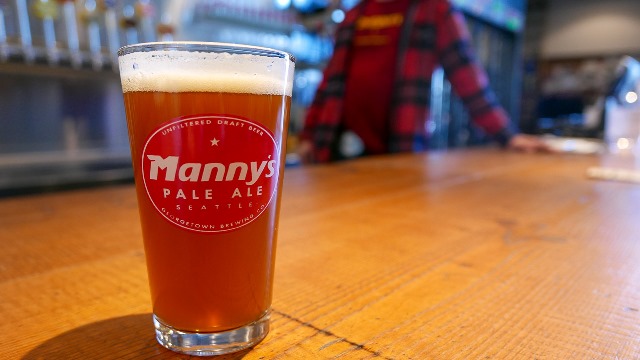 Read our follow up story about how much money was raised by this project. It is really, really impressive!

On February 27, 2003, Manny Chao and Roger Bialous, the founders of Georgetown Brewing,  delivered the first kegs of Manny’s Pale Ale to Seattle’s venerable Latona Pub. They couldn’t have known that over the coming decades their new brewery’s first beer would become Seattle’s most ubiquitous draft beer. In King County, wherever you sidle up for a pint, you are more likely to see Manny’s on tap than any other beer.

Suddenly, because of the pandemic, our entire world is upside down, so it’s only fitting that Manny’s Pale Ale is going someplace it has never been, someplace it was never supposed to go: into 12-ounce aluminum cans. While the brewery packages some of its other beers in cans, the mantra has always been “never Manny’s.” Never say never. Georgetown Brewing just announced that Manny’s Pale Ale is destined for cans. Sixpacks of 12-oz cans should be available at the brewery starting on Saturday, May 23rd. A few days later, look for it wherever you buy beer. This is a limited release, expected to last six weeks.

All of the proceeds from the sales of “Manny’s Cannies” will benefit a number of local non-profit organizations, all geared towards supporting pandemic-impacted workers in the food and beverage industry.

A statement from Manny and Roger says, “When we started canning beer at Georgetown Brewing, we figured leaving Manny’s Pale Ale as a draft-only beer would help us stay connected to the foundation of our business: the bars and restaurants that first served our beer. If you want a pint of Manny’s, you have to go out, be social and support your local bar or restaurant. That’s why, for our first 14 years in business, we only sold kegs. It was also our excuse to drink beer at bars and call it work.”

“Now, more than ever, your local bar and restaurant needs your help. They have always been there for you. They have fed you, they have provided shelter, they have kept you hydrated… and your favorite bartender has listened to every one of your stupid stories. It’s time to return the favor. 100% of our profits from the sale of Manny’s cans will go to support bar and restaurant workers throughout the state of Washington.”

“These cans are a limited release, and when this pandemic ends, we’ll see you at the bar for a pint and a cheers.”

In a press release, Georgetown Brewing explains the philanthropic nature of the Manny’s canning project:

As our state starts to talk about a phased approach to recovery, it might seem like the need for fundraising is over. But the fact is, while there is talk of reopenings and a return to “normal”, it’s going to take time, and bar and restaurant employees will be the new wave of workers on the “front lines”. Keeping safe while moving forward will keep that recovery within our grasp, and while immediate needs may be changing, support is still needed.

Our hope is to aid in that recovery. Donations will be made to Big Table in Seattle and Spokane, The Plate Fund, We Are Yakima fund and other non profit organizations helping to support employees in the food and beverage industry in Washington State.”

An undertaking like this doesn’t happen without partners, and we have a lot to thank:

The generosity of Great Western Malting, Hollingbery & Son Hops, Hopsteiner and Roy Farms was vital to this project, whether through the sourcing and donation of ingredients, or cash contributions.

Getting cans and packaging made is not a fast process – it takes time, and the speed with which this project was turned around cannot be overstated. We’d like to give Crown Beverage and Packaging and WestRock a huge shoutout for their ability to fast track this project in their facilities, especially during a time when they are already slammed due to increased demand.

And our distributors – the folks that are the reason you can get our beer somewhere besides the brewery: Columbia Distributing, Columbia Wenatchee, Crown Distributing, Midway Beverage, Pioneer Distribution and Tripp Distributing. They all stepped up to not only get the beer in stores quickly, but are donating all or a portion of profits.

This limited six week run of 6 packs of Manny’s Pale Ale should be available at the brewery beginning Saturday May 23rd and available in Washington stores after Wednesday May 27th.