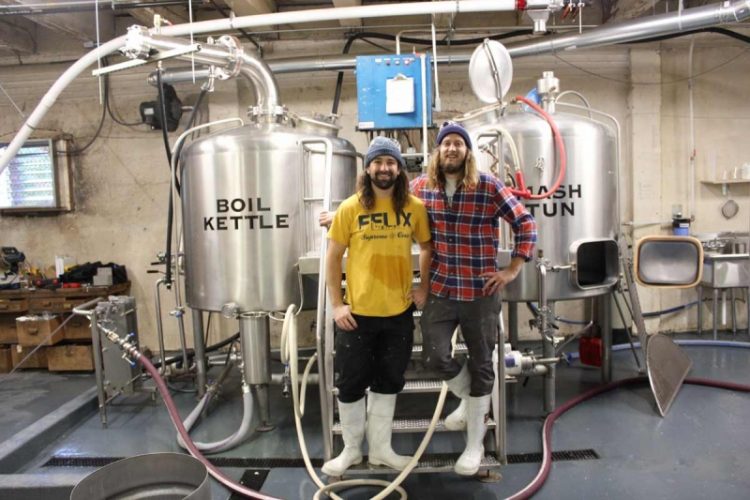 When Elysian Brewing announced that it had been acquired by Anheuser-Busch, everyone freaked out. It was unexpected and more than a little bit shocking. Especially for the employees. Steve Luke’s decision to leave Elysian and open Cloudburst Brewing in Seattle was not at all related to that ominous news. His plan was already very much in motion. Now, we are very close to tasting the first Cloudburst creations.

Steve Luke worked as the brewer at Elysian Fields where he devised some of Elysian Brewing’s best-loved brews, like Dayglow IPA, Space Dust IPA, Split Shot Stout, and the infamous Gourgia on my Mind, the pumpkin-peach ale Budweiser canonized in a Super Bowl commercial as an example of an overly fussy beer. With tricks like that up his sleeve, it’s understandable that Seattle’s beer geeks are excited to try beers from Cloudburst Brewing. Well, it’s about to happen.

Over the past several months, Steve has been busy building Cloudburst Brewing, which is located just a couple blocks north of the Pike Place Market on Western Ave. (See our previous post.) The brewery’s tasting room is still not ready for the public, but Cloudburst Brewing’s fermenters are full and the brewery will soon begin distributing beer to local accounts. They have not planned any sort of big release party, but we expect to hear about Cloudburst events around town soon. We know of one event already (below).

I visited the brewery the other day and enjoyed an opportunity to talk with Steve about his plans. Also, I sampled some of the beers. One of the very first Cloudburst beers you’ll discover is a riff on a Seattle classic: the Old Flame IPA was fashioned after, and pays homage to, Big Time Brewing’s Scarlet Fire IPA. A different, all original IPA, Cloudburst’s Flashing Lights IPA will not disappoint the hop heads, I promise. It’s a hoppy dingdong for sure.

Market Fresh Saison is an interesting concept. Steve intends to incorporate an every-changing selection of market-fresh ingredients in the recipe for this Saison. The version I tasted included cranberries and sage because that’s what he found one day at the Pike Place Market, which happens to be one of the brewery’s neighbors. What makes it into the next batch depends on what’s fresh, seasonal, or just plain interesting. Regular trips to the market are part of the plan at Cloudburst.

So when and where can you drink the beer? We know this. On Thursday, December 10, from 5:00 – 8:00, The Beer Junction will host a Cloudburst Brewing tasting event. As I said, Cloudburst is not planning a big, official “coming out” party, but look for more events like this in the coming weeks and months.

As far as the brewery tasting room is concerned, Steve doesn’t want to set unrealistic expectations. It will be ready when it’s ready. A lot of it has to do with inspections and permitting. Keep an eye on the brewery’s Facebook page for the best information.