Fittingly, this year’s beer will be an IPA — Fresh Off the Farm IPA. Fitting not only because IPA remains the most popular style of craft beer in Seattle (and across the country), but fitting because Bale Breaker excels at brewing hoppy beers. The beer will be released in cans as well as on draft at many locations around the Seattle area and beyond. 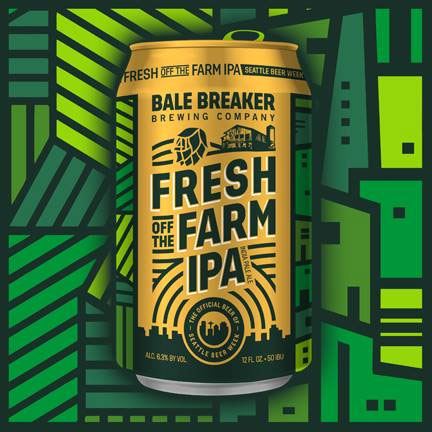 Here is the official press release.

Bale Breaker Brewing Co. is honored to be the first Yakima Valley brewery to brew an official Seattle Beer Week beer. Fresh off the Farm IPA will be packed with farm-fresh hops, of course, and it will be available in cans and on draught throughout Washington for the 9th annual Seattle Beer Week May 4-14.

Seattle Beer Week (SBW or SBW9) was created to celebrate and showcase the tight-knit beer community of the Northwest. There will be hundreds of events in the city throughout this year’s 9th annual celebration of beer. For all Bale-Breaker-specific event updates, keep your eyes on Bale Breaker’s SBW9 webpage or to be first to know about all the Seattle Beer Week events, follow @seattlebeerweek on Twitter.

According to industry sources, suppliers and distributors, SBW is among the top three beer weeks in the country for the originality of events and the number of participants.

The Official Beer of Seattle Beer Week 2017, Fresh off the Farm IPA was brewed in the center of hop field #41, just minutes from downtown Yakima, by Bale Breaker Brewing Company. Founded by fourth-generation hop growers, this truly farm-to-glass brewery crafted a brand-new IPA to celebrate the 9th Annual Seattle Beer Week. A big hop aroma on a clean Pilsner malt base perfectly showcases a few of the newest and most exciting hop varieties off their family’s hop farm. Whirlpool additions of Simcoe® and Mosaic® add depth to the nose generated from a post-fermentation charge of Ekuanot™, Loral™, and the still-experimental HBC 630. From the fields of the Yakima Valley to the streets of Seattle, Fresh off the Farm IPA delivers farm fresh flavor no matter where it’s poured.