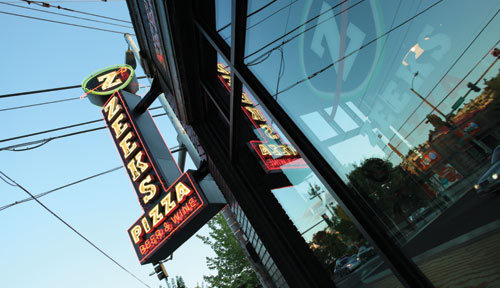 Compared to a run-of-the-mill pizza joint, Zeeks Pizza has always lent a lot of focus to its beer program. To begin with, they actually think of a beer as something deserving its own program. Perhaps the best embodiment of Zeeks beer love is the fact that they’ll deliver beer along with your pizza. Who does that? Zeeks does that, and they do it at reasonable prices. In some cases their beer price is less than you’ll pay for the same beer at the grocery store. (see our previous post about beer delivery)

We just learned that Zeeks Pizza is expanding, adding new locations and new business opportunities. Among the expansion plans, the company just opened the first Zeeks Delivery Shack in Sammamish. It’s not a sit-down restaurant, but it allows people in the area to order beer and pizza for deliver or to stop in an pick up a pie. The company also announced it’s plans to open new Zeeks locations in Capitol Hill, Woodinville, and Tacoma.

Here’s the press release from Zeeks about all of this news.

Starting June 26, residents of the Sammamish Plateau are invited to celebrate the company’s newest opening and enjoy Zeeks’ signature handcrafted pizza and local beer line-up by taking advantage of its grand opening delivery and take-out specials. The Sammamish Zeeks is the first-ever “Zeeks Delivery Shack” focused exclusively on delivery and take-out.

“We are finally launching our new Delivery Shack business model and we know it’s going to be a huge hit in Sammamish. Our franchisee Mark Mullet is also owner of Issaquah’s Zeeks Pizza-Pub and he has been hosting Sammamish families for years, so we know we have a ton of fans in the community,” said Dan Black, President of Zeeks Pizza. “Plus, we are active supporters of youth athletics and we are stoked that the Sammamish Zeeks will be right in the midst of three big-time high school athletic programs.”

In addition to Sammamish, residents in Capitol Hill, Woodinville and Tacoma, Washington will soon be able to enjoy Zeeks’ unique brand personality and trademark food and drink options in their very own neighborhoods, as new franchise restaurants are slated for opening throughout 2018 and early 2019.

“To date, our franchising program has been mostly opportunistic – basically people have come to us,” said Black. “For the first time ever, we are actively promoting our franchise opportunity and so far it is paying off. Interest along the I-5 corridor from Bellingham to Olympia is intense right now.”

The company’s goal is to establish 30 to 35 Zeeks locations in Western Washington while seeding interest throughout the Northwest and down the West Coast. Territories are exclusive and, on Zeeks’ home-turf of Western Washington, limited.