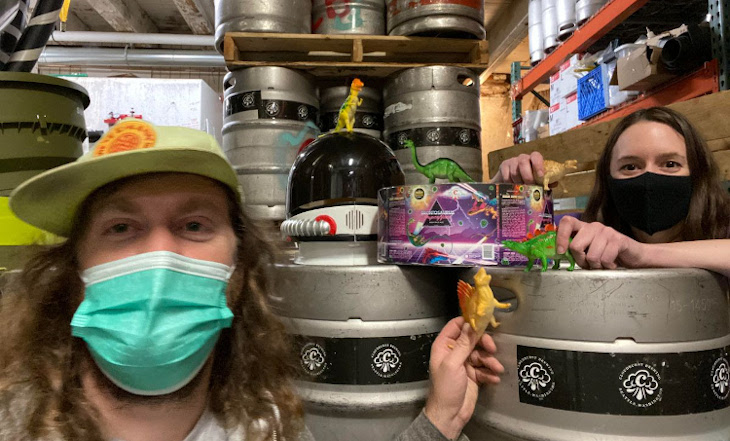 We need something to remind us of how things were before all of this happened. Six years ago, the world looked a lot different (understatement). Back in October 2016, things were simple. We got shots to stave off the flu, not vaccines to combat the plague. You could get to West Seattle; there was a bridge. The Seahawks were good; the Mariners were bad. All was right with the world back in 2016. Unicorns, rainbows, and Pokémon Go. Before the wrath of God.

In 2016 a new brewery opened in Seattle and took the world by storm. They called it Cloudburst Brewing. To mark the 6th anniversary of The Beer Junction, Cloudburst created Brontosaurus Supernova. It was a very good beer and now it is back.

The most important thing for you to know is that The Beer Junction and Cloudburst Brewing are reintroducing Brontosaurus Supernova on Thursday, November 4th. It will be available on draft and in cans starting at 5:00. This time, the beer will benefit cancer research, in memory of Morgan Herzog, the founder of The Beer Junction. In January 2020, Morgan’s battle with Multiple Myeloma came to an end. Come hoist a pint in his honor.

Think of it as a beer that serves as a reminder of the good old days. Like that moment in time, it was good. Very, very good. This time around, Brontosaurus Supernova will benefit Fred Hutchinson Cancer Research Center. More specifically, it will benefit Multiple Myeloma research.

There is a lot more to the story. The rebirth of Brontosaurus Supernova means a lot. I am going to let Allison Herzog, the owner of The Beer Junction in West Seattle, tell the story. Here’s what she said in an email:

“I would like to extend my gratitude to Cloudburst Brewing and announce a special collaboration that we did with them–the re-release of Brontosaurus Supernova. The above picture [top of post] is of me (Allison) and Steve Luke, the owner and head brewer of Cloudburst Brewing, during our brew day earlier this month.  For those who don’t remember, Brontosaurus Supernova was The Beer Junction’s 6th anniversary beer, originally brewed in 2016.”

“Think back five years…back to early 2016. People played Pokemon Go on the sidewalks of West Seattle.  It was the beginning of a heated election year. IPAs were a little darker and usually not as hazy.”

“And after much anticipation from the Seattle beer community, Cloudburst Brewing opened in January 2016. Morgan Herzog, Owner and Founder of The Beer Junction, loved their beers immediately.  He and Steve Luke at Cloudburst Brewing crossed paths and Morgan offhandedly joked that if he opened a brewery, it would be space and dinosaur themed.”

“Months later, Morgan asked Cloudburst if they would brew The Beer Junction’s 6th Anniversary beer, to be released in June 2016, and was honored when they agreed. Somehow Steve remembered Morgan’s comment about a space-dinosaur themed beer, and after collaborating, Brontosaurus Supernova was brewed for the first time.”

“AND IT WAS DELICIOUS!!! We had a great 6th Anniversary party with blow up dinosaurs, a rainbow Cloudburst firkin, and purple dinosaur shirts.  It was one of Morgan’s favorite anniversary beers.”

“About a year later, in May 2017, Morgan would be diagnosed with Multiple Myeloma, a blood and bone cancer. With only a few exceptions, Multiple Myeloma is a terminal diagnosis.  Current treatments can prolong your life, but there is no cure.  Morgan was treated for two and half years at Seattle Cancer Care Alliance (a partnership between UW Medicine, Fred Hutch Cancer Research Center, and Children’s Hospital). Despite a wonderful medical team at SCCA and UWMC, Morgan died from Multiple Myeloma in January 2020.”

“Morgan had shared his diagnosis with Steve Luke and the team at Cloudburst and asked them to brew Brontosaurus Supernova a second time, this time to benefit Multiple Myeloma research. Unfortunately, Morgan passed away before he could see it happen. But we at The Beer Junction are honored and humbled that Cloudburst was good on their word, and has brewed Brontosaurus Supernova once again in Morgan’s honor.  We also want to thank Skagit Valley Malting for donating the malt used in this beer so we can apply more proceeds to cancer research.”

“Please raise a glass in Morgan’s memory!  On Thursday, November 4th at 5pm, we will release the second iteration of Brontosaurus Supernova on draft and in cans.  The Beer Junction is donating 100% of the proceeds from this beer to Fred Hutch for Multiple Myeloma research.”