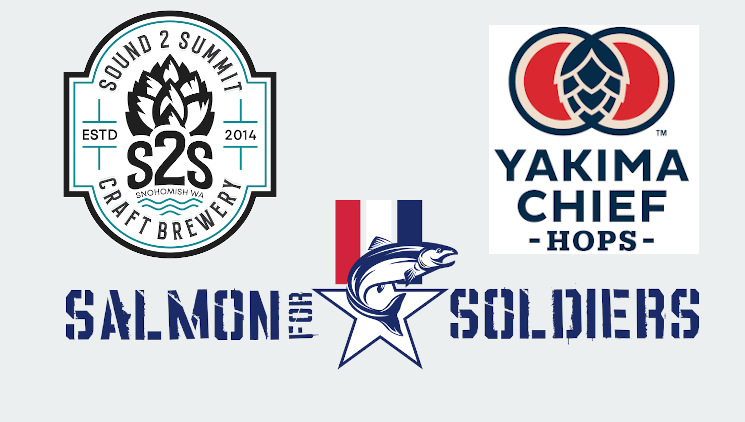 To honor veterans this November, Sound to Summit Brewing stepped up to create a special beer: Soldiers Salute IPA. For every pint sold, the brewery will donate $1 to a local veterans support organization: Salmon for Soldiers. Over the Veterans Day weekend (Nov. 11 thru 14), the brewery will double that, donating $2 to the cause. Sound to Summit Brewing is located in Snohomish, Washington (address and map below).

The beer showcases a special hop blend from Yakima Chief Hops. For the fourth year, the hop supplier produced Veterans Blend and made it available to breweries looking to support our nation’s active and retired veterans. Yakima Chief Hops donates a portion of the proceeds from the sale of the hop blend to a veterans services organization. Read more about all of this below in the press statement from Sound to Summit Brewing.

Taking advantage of the Yakima Chief Hops 4th Annual Veterans Blend, S2S plans to recognize our countries active and retired veterans with a special beer – Soldiers Salute IPA. In addition, we are teaming with Salmon for Soldiers and donating $1 from EVERY pint sold to this charity and over the Veterans Day weekend (November 11 – 14) we are doubling the donation. Our goal is to donate more than $2,000 to help returning veterans.

Salmon for Soldiers is an organization that S2S has supported for quite a few years, this year we wanted to do more than just support them, but to highlight to our customers what this amazing organization is doing by increasing our participation and spotlighting this great organization.

The stated mission of Salmon for Soldiers is to offer a sense of normalcy and relaxation to our nation’s Veterans through fishing. Salmon for Soldiers’ fishing opportunities are designed to help reduce stress while creating new relationships with others who love fishing. The events are designed to accommodate Veterans with paralysis, PTSD, TBI, and other debilitating challenges.

Representatives from Salmon for Soldiers will be at the brewery on Veterans Day, November 11th to hand out literature and giveaways such as hats, t-shirts, and other merchandise.

“Being the son of a Korean War veteran, and seeing what so many have sacrificed, it is an honor to salute these brave heroes who have sacrificed so much for our country,” said Doug Milnor, Co-Owner, Sound2Summit Brewery. “Many have a tough time adjusting once they get home, our hope is that by partnering with Salmon for Soldiers, we can help them back on the road to recovery. Let’s raise a glass and say cheers and honor all of those that served our great country along with their families. We say thank you!”

About the 4th Annual Veterans Blend from Yakima Chief Hops!

Each year, Yakima Chief Hops celebrates US military Veterans while collaborating with the brewing community to create something bigger than beer. A new blend of hops for the Veterans Blend is selected each year by military Veteran brewers across the states.

The varieties included in the 4th Annual Veterans Blend are Idaho 7®, HBC 630, Ekuanot®, Azacca®, and HBC 472. The blend is designed to hit a 10%-12% alpha acid range. One exciting feature of the blend is its production timing, often being some of the first hops processed to completion in a crop year to make the Veteran’s Day beer release timeline.

A portion of each order goes to a charity of their selection – this year they have selected K9s for Warriors. K9s For Warriors

Through the sale of the Veterans Blend, YCH makes a donation to support a non-profit that works to provide aid or resources to former military service members. This year, YCH is proud to partner with K9s For Warriors, the largest provider of Service Dogs trained to aid military Veterans in everyday life. Their mission is to end Veteran suicide by providing Service Dogs to
Veterans suffering from PTSD, traumatic brain injury and/or military sexual trauma.