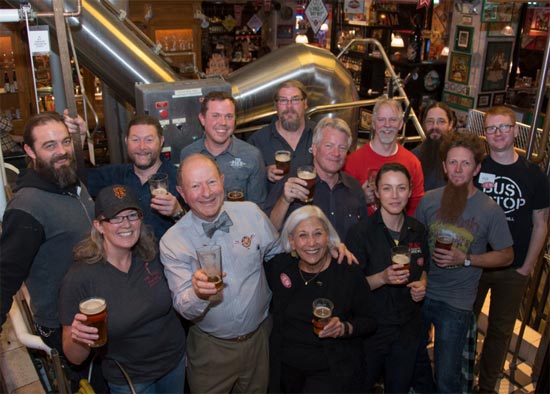 Recently, some Pike Brewing alumni returned to the brewery to try the first batch of the newly reformulated Pike Place Ale. That’s them in the picture above. How many former Pike brewers can you name? Included in the photo above, Jason Parker (red shirt), who brewed that very first batch of Pike Place Ale back in 1989. Picture via Facebook.

The world of beer was a lot different in 1989 when Pike Brewing Company brewed its first batch of beer on a modest four-barrel system. That’s an understatement. Perhaps the most significant change from a brewery’s perspective is the increased availability of a wider variety of ingredients. That, after all, is what’s behind all the great beer we drink today.

Back in the day, to brew Pike Place Ale, they imported Maris Otter malted barley from Britain. You know, the good stuff. The beer has always relied on top quality malted barley, but Pike Brewing just introduced a slightly reformulated version of Pike Place Ale that uses a key ingredient from much closer to home. Instead of relying on grain imported from across the Atlantic, the new version of this venerable brew makes use of locally grown, delicious, farmer-direct Skagit Valley Alba malted barley.

According to the brewery, Pike Place Ale is “The perfect beer to pair with food, Pike Place Ale is a northwest style Pale Ale, well balanced with citrusy Yakima Valley hops and rich Skagit Valley malt. The recipe has been updated, to suit today’s craft beer drinkers’ palates.”

A portion of the proceeds from the sale of Pike Place Ale benefit the Pike Place Market Foundation.

Pike Place Ale is available year-round on draft and in 6 packs of 12 oz. bottles.

Here is some other beer release info from Pike Brewing.

This year’s label pays tribute to Charlie Papazian. We have a vibrant and flavorful craft brewing scene today thanks to Charlie, who wrote The Complete Joy of Homebrewing, founded the American Homebrewers Association, the Association of Brewers and the Great American Beer Festival (GABF).
IBU: 28
ABV: 8.30%
OG: 1.076
°L – 19

Pike Auld Acquaintance is available on draft and in 22 oz. dinner bottles. Find Pike Brewing Company beer on tap or in bottles near you.

This collaborative brew is the first in an ongoing series between Pike Brewing and Seattle coffee roaster, Caffe Vita.

Pike Vita is available on draft and in 22 oz. dinner bottles exclusively at Metropolitan Markets.