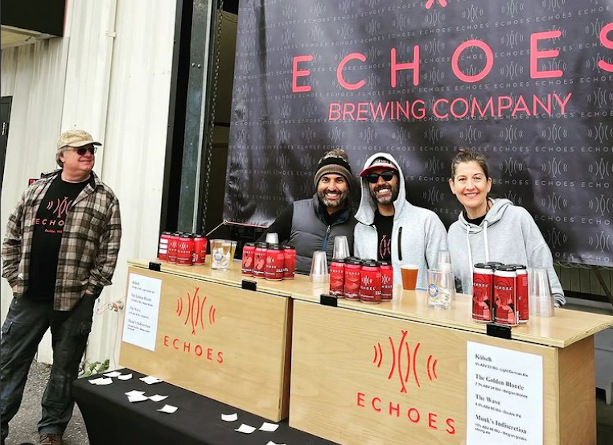 Beer lovers were saddened to learn that Sound Brewery was shutting down. The news came in August of 2019 when the brewery announced it was closing its taproom; the brewery itself would also close soon after. Sound Brewery, the makers of Monk’s Indiscretion and other award-winning beers, went silent.

But wait! Where there’s a sound, there’s an echo! Echoes Brewing is bringing Sound Brewing back to life. Kind of. It’s new, but it’s the same. The brewery is already producing beer, including the aforementioned Monk’s Indiscretion, and is currently building out its brand new taproom at a new location in Poulsbo. You can find Monk’s Indiscretion and other beers from Echoes Brewing at select retailers around the Poulsbo, Bainbridge, Silverdale areas.

The man behind Monk’s Indiscretion and Sound Brewing’s other creations was Mark Hood, the brewery’s head brewer and co-founder. Mark is now working his magic at Echoes Brewing.

For the founders of Echoes Brewing, bringing Mark on board and recreating some of the Sound Brewing beers was always part of the plan. “It’s a nice link back to really where we are coming from which is Sound Brewery, but it’s meant to be the next iteration of it,” said Samay Jaine, one of the owners of Echoes Brewing, in an interview with the Kitsap Sun. “Mark had to come along, that was the attraction to Sound, not just the space or equipment, it was him because he does quality work.”

Fueled by their shared love of Monk’s Indiscretion and other Sound Brewery beers, brothers Samay and Manas Jaine set out to buy the brewery and bring it back to life, holding on to some of what made the brewery great while adding their own vision. The aptly named Echoes Brewing is both a new sound as well as a reverberation of all that Sound Brewery once was.

The new brewery taproom is currently under construction at a location right across the street from Rainy Daze Brewing in Poulsbo. Echoes Brewing hoped to open in October but supply chain issues have impacted the timeline.

When the Echoes Brewing taproom opens, expect a family-friendly atmosphere, another critical component of what the Jaine brothers want to create. “In our taproom, the focus is really meant to be a high-quality beer facility where you also can bring your family,” Samay Jaine told the Kitsap Sun.

Beyond simply welcoming kids, the taproom at Echoes Brewing will provide family-focused amenities, like a space for nursing mothers, gender-neutral bathrooms with diaper changing stations, and a play area for the kids.

While the taproom comes together, Mark Hood is focused on small-batch brewing. “Right now being able to focus on the taproom gives me a lot more freedom to do small batches,” he told the Kitsap Sun. “I am still doing some favorites from Sound like [Monks] Indiscretion Belgian Pale Ale. It’s what got us into wanting to start a brewery in the first place.”