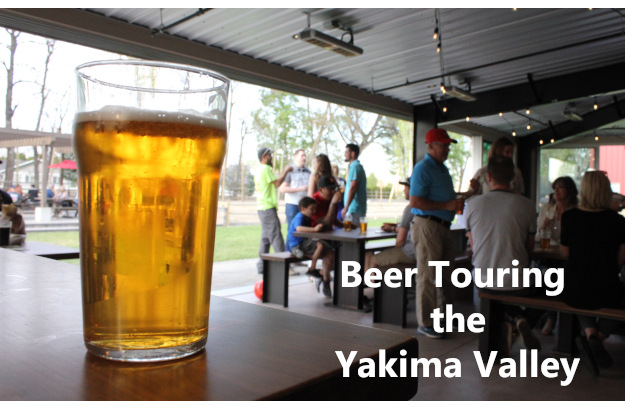 Often recognized for its wine, the Yakima Valley emerges as a beer destination

Here in the Pacific Northwest, when savvy beer tourists think of beercationing outside of the big cities, they usually think of Bend and Bellingham. Those cities, each with populations roughly somewhere around 100,000, boast an impressive number of breweries for their size. Yakima is about the same size and, though it may not be top-of-mind for most beer travelers, it now qualifies as a legitimate beer destination.

The Yakima Valley is widely recognized as the heart of the American hop industry: most of the hops in the nation, and a very significant portion of the hops in the world, are grown and processed in the Yakima Valley. In recent years, the beer culture has finally caught up to the hop culture. A place with just a couple breweries suddenly has a whole host of breweries and a bunch of worthwhile beer destinations.

Here’s what you need to know to enjoy a beer adventure in the Yakima Valley.

Yes, there will be time for beer, but why not earn it first? Snow Mountain Ranch, part of the Cowiche Canyon Conservancy, is just 20 minutes from downtown Yakima. There are several different trails that offer a lot of options for distance and exertion level, so it’s the perfect place for a casual stroll, a moderate hike, or a longer, more aggressive climb. The loop trail to the top is about 6 miles and 1,100 feet of gain.

Even closer to town, the uplands trails, another part of the Cowiche Canyon Conservancy, offers a similar variety of options for stretching your legs. This trail network was recently expanded and upgraded, so it still has that “new trail” smell.

After you’re done hiking at Snow Mountain Ranch, drive three miles east on Thompson Road and you’ll arrive at Cowiche Creek Brewing, where you can kick back on the sprawling lawn and look across the valley at the mountain you just conquered. Snow Mountain is just one small part of the spectacular panoramic view. In addition to excellent beer, the hamburgers will blow your mind. Dogs and kids welcome.

The Scoop: Tiny Dog Session IPA is named after the affable black lab that you will usually find hanging out in the beer garden. Tiny Dog loves to fetch and is happy to teach you how to throw a tennis ball.

As of 2020, this is now the third-largest craft brewery in Washington, which should surprise no one. Seriously, they make fantastic beer and your trip would be incomplete without a stop at Bale Breaker Brewing.

This brewery is built in the middle of a hop field on the outskirts of Yakima, with an address in Moxee (the self-described “Hop Capitol of the World”). In addition to indoor seating, the brewery’s taproom offers a covered, semi-enclosed patio, and a large beer garden. On weekends, the brewery often hosts a food truck. Dogs and kids welcome.

The Scoop — Sown and grown in Moxee, WA. The brewery’s founders are part of the family that owns the surrounding farm, where they grow more than hops: they also grow barley that is used in some of the beer. Aptly, those estate-grown beers are called the Homegrown series.

Located in the town of Sunnyside, about 25 minutes south of Yakima, Varietal Beer Company is the darling of the community, which is largely made up of folks who work, in various capacities, in the agricultural industry.

In its spacious taproom and lovely beer garden, this brewery serves up some of the best beer in the Yakima Valley, if not the entire state. The wide variety of beers are innovative and often hop-forward, but sometimes yeast-driven, fruit-inspired, and simply delicious. It is worth the drive, without question. Food trucks sometimes, with a plan to eventually have their own, permanent food truck on site. Dogs and kids welcome.

Located just a block off the main drag in downtown Yakima, Single Hill Brewing opened in 2018. The taproom offers plenty of indoor and outdoor seating, as well as a seriously great food truck, 5 Salsas, that serves tacos, burritos, and other authentic Mexican food every Saturday and Sunday. Bring the dog and the kids and plan to stay awhile because there’s a lot of great beer for you to sample.

The Scoop — The term single hill is used in the hop-farming industry to describe a late stage in the development of a new hop variety. Individual experimental plants are grown in “single hills” for evaluation before becoming the source for an entire variety.

The motto at Wandering Hop Brewery is we’re going places. The folks who started this brewery credit their many travels as the inspiration for the brewery and the beers. The cozy taproom offers indoor and outdoor seating and is located a few minutes west of the heart of downtown. The menu features sandwiches and lighter fare as well as beers. Note that this is a 21+ establishment, so leave the kids in the car (that’s a joke). Well-mannered dogs are okay on the patio.

The Scoop — (April 2021) Wandering Hop Brewery will soon open a new, second location in the town of Zillah, just a few minutes south of Yakima. We expect the new brewery and taproom to open soon. Read the story.

The new kid in town, 5th Line Brewing was just barely open when we visited. Not far from downtown, and not too far from Single Hill Brewing, this brand new brewery opened in March 2021. In addition to beer, the taproom offers some food (mostly pizza) from what it describes as a “snack kitchen.” Indoor and outdoor seating, family-friendly. When we visited, to be honest, the beers tasted like the brewery was new (because it is brand new). To their credit, they recognized this and fully intend to take advantage of the many resources around them (other local brewers) to get the beers dialed in.

The Scoop — the folks who started this brewery are involved with (volunteer at) the local ice rink; they are big-time hockey fanatics. Fifth line is a hockey term. A line is a group of players on a team, and there are typically only four lines, so the term is a nod to the act of getting together for a beer after the game. I take it to be similar to the 19th hole in golf.

We didn’t have time to hit them all, but we did manage to squeeze in a couple other beery destinations on this trip.

The Kiln — A new, large, rather slick, and fancy taphouse in the West Valley area of Yakima. Lots of beer as well as food. The beer garden is huge, with lots of lawn and picnic tables, as well as a sheltered area.

The Public House of Yakima — Also in the West Valley area, this converted house is a taproom and kitchen with a killer beer lineup. It is cozy inside, with a spacious beer garden out back that invites discovery. Lots of different little spaces to find and enjoy. We are hearing rumors that they may be opening a second Public House of Yakima, which is really good news.

To find other breweries in the Yakima area, see our map of Eastern Washington Breweries.

Depending on your budget, your desired location, and your dog-friendliness requirements, here are my top three recommendations.