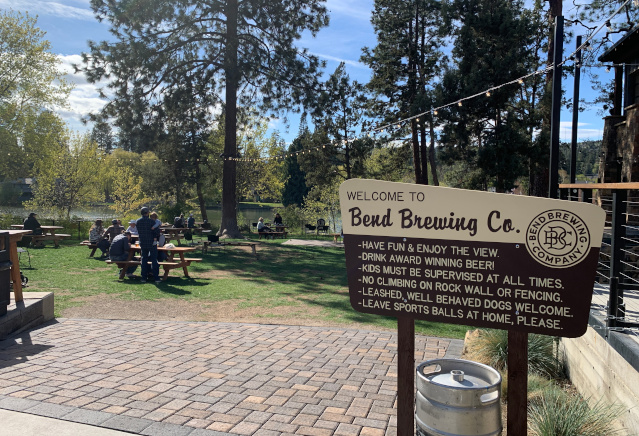 Park the car, lace up your walking shoes, and find some beer.

Few cities in the Northwest are so beer-obsessed as Bend, Oregon. Few cities in the world offer such a high density of breweries or as many breweries per capita. And as if that isn’t enough, Bend is a spectacular place to visit in its own right, especially if you enjoy the great outdoors. Beyond skiing, mountain biking, kayaking, and rock climbing, Bend offers excellence for the less aggressive outdoor enthusiast too. For instance, beer trekking around town from one brewery to the next.

Although it is tempting to get back in the car and explore the surrounding environs, consider focusing some time on downtown Bend. Park the car for a couple of days and enjoy the things you can reach easily on foot. Get your daily steps in by strolling from one brewery taproom to the next.

For my money, McMenamin’s Old St. Francis School is the best place to stay in downtown Bend. At the bottom of this story, I tell you about two other options: Wall Street Suites, which is rather swank and fancy, and The Historic Lucas House Bunk + Brew, which is more akin to a hostel.

The Old St. Francis School offers a number of different room options and a sprawling, multi-building campus. Enjoy the outdoor spaces for dining and drinking, relax by one of the fire pits with a beer or a cocktail, melt your sore bones in the incredible soaking pool, take in the funky charm for which McMenamin’s properties are known. On top of all that, the location is primo.

Pro Tip: It’s very popular. Guests often reserve their rooms many months in advance, so it is always worth checking for cancellations. Book a room somewhere else if you must, but keep checking back with the Old St. Francis School to see if something opens up.

Route notes: Google maps will direct you to a pedestrian-only pathway for the last bit of the route. Alternately, you can walk along Industrial Way. Google Maps does not provide this as an option, but it works. Distance from Old St. Francis School: 0.7 miles.

Immersion Brewing – Located in the Old Mill District, in a cool, revamped historic building that once served as a box factory built in the early 20th century during Bend’s first logging boom, Immersion Brewing is a particularly great stop if your companion favors wine or cider: Bledsoe Family Winery and Avid Cider Company have tasting rooms right next door.

Route notes: This is the center point for the three south-side breweries, all of which are basically located on Industrial Way. Distance from Old St. Francis School: 0.5 miles.

Monkless Belgian Ales – Also in the Old Mill District (as are the two breweries above) lovers of Belgian-style beers should not miss this relatively new, but already award-winning, brewery. The location is fabulous, with a huge deck offering a fabulous river and territory view. It’s right across the river from the Les Schwab Amphitheater, so if there’s a concert happening, you’ll hear it for free. Upon approach, the building’s exterior belies what awaits; it’s rather nondescript from the outside, but the deck and the interior are lovely.

Route notes: Immersion Brewing is less than .25 miles east, with Crux Fermentation Project another .25 miles up the road from there, so this makes a great first or last stop on your Old Mill District beer trek. Distance from Old St. Francis School: 0.6 miles.

Boss Rambler Beer Club – This busy and bustling brewery taproom is located along a busy and bustling street in the Westside neighborhood. The patio out front is where you want to be. The interior is contemporary and sleek, which sets it apart from a lot of other beer stops in town. Also differentiating it from the fray, Boss Rambler brews its own beer, but not at its own brewery. At last report, they brew it across town at Silver Moon Brewing.

Route notes: Galveston Avenue is busy but pedestrian-friendly. You can also take a quieter, albeit longer, route through Drake Park and across the footbridge. Distance from Old St. Francis School: 0.7 miles.

Sunriver Brewing, Galveston Pub – The actual brewery is about 20 minutes out of town in the Sunriver community, but the Sunriver Galveston Pub is located next door to Boss Rambler. A full restaurant menu, indoor-outdoor seating, with large rollup doors opening to Galveston Ave. Around the back, you’ll find a lovely beer garden with heaters and a fire pit.

Worthy Brewing Beers & Burgers – Located right across the street from Drake Park, this outpost offers a selection of Worthy Brewing’s beers alongside a burger-focused menu. The main brewery and pub is across town, but you can get a good glimpse of what Worthy is all about at the downtown taproom.

Route Notes: A very short walk down to the park and you’ve arrived. Distance from Old St. Francis School: 0.2 miles.

Bend Brewing – Located along the river, Bend Brewing’s beer garden is aptly described as park-like. Sprawling lawn on the river’s bank, tall trees for shade, picnic tables, and lots of space for relaxing. Inside and out, always a winner.

Deschutes Brewing Public House – You’re probably acquainted with this brewery’s popular, familiar beers, like Mirror Pond Pale Ale and Fresh Squeezed IPA, but at the pub in Bend, they dish up house-brewed creations you’ll find nowhere else, not just the familiar stuff that is brewed at the big facility across town.

Route Notes: It’s about three blocks east of Bend Brewing, right along your way to the next stop on our trail. Distance from St. Francis School: 0.2 miles.

Silver Moon Brewing – The location has quite a history, one that includes a notorious strip club called The Office. You should ask about it when you visit. Though you’d never know it from the street, there is a large and comfy beer garden around the back.

Food and Other Stuff

Spoken Moto – It’s a coffee shop with a beer problem, or maybe it’s a beer bar with a coffee problem. Located between Immersion Brewing and Crux Fermentation, this exceedingly hip, motorcycle-themed coffee and beer joint is a worthwhile stop along the way.

Ocean Rolls – Wherever you fetch your breakfast or your morning coffee, consider ordering an ocean roll if available. The ocean roll has nothing to do with sushi; rather, it’s a local delicacy that fits somewhere between a croissant and a cinnamon roll.

Wall Street Suites – This is an old motor lodge that’s been reimagined into modern, hip suites that are comfortable and rather fancy. A couple blocks north of downtown, its a bit of a walk but nothing too formidable.

Lucas House Bunk + Brew – They do have some private rooms, but they also have bunkhouse-style options that are more affordable. Very close to downtown. They have beer.

While lots of adventure awaits you around Bend, whether it inolves beer or not, downtown Bend is worth your attention. You can easily spend two or three days without moving the car. Slow down, relax, and enjoy.