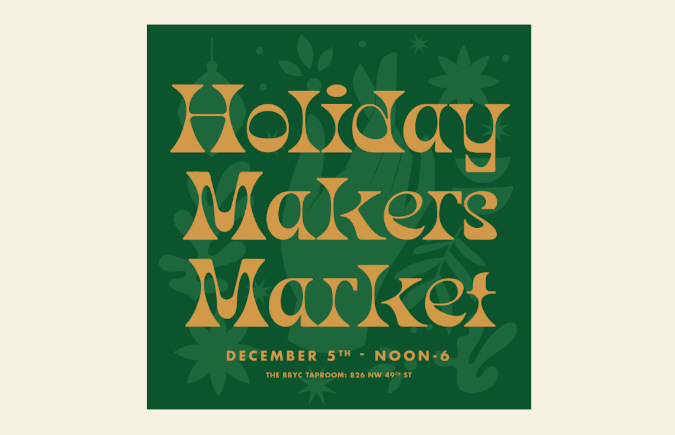 Here’s a chance for you to do some holiday shopping with a tasty beverage in hand. At their taproom in Ballard, Bale Breaker Brewing and Yonder Cider are hosting a Holiday Makers Market feature products from local producers and vendors. Also, both companies will release some special treats at the event. Barrel-aged beers. Winter ciders. All sorts of lovely gifts for those who imbibe and those who do not.

The Bale Breaker & Yonder taproom is located at 826 NW 49th Street in Seattle. Here is the official announcement about the Holiday Makers Market with more details.

You can also expect exciting releases from both Bale Breaker and Yonder Cider. Bale Breaker will be releasing 4 new barrel-aged beers in 750ml bottles, perfect for holiday gifting – Wood & Wire Imperial Stout, Incoherency Golden Stout, Nouveau Blanc Vinoveza Ale, and a whiskey barrel-aged variety of their year-round Breakfast Stout, Dormancy. A tasting will be set up at the event as an opportunity to try these unique beers before purchasing. Yonder will be sampling its newest release, Velvet Cashmere, a blend of their popular winter seasonal, Cashmere, and Fast Penny Spirits’ Amaricano amaro. Guests will be able to sample this one-of-a-kind cider cocktail alongside the amaro used to create it, plus a limited release hot spiced cider. Customers will also have this unique opportunity to purchase the previously draft-only collaboration brew between Yonder Cider and Bale Breaker: East Meets West Sour Graf. This will be available for purchase in limited edition 750ml bottles.

Additionally, the taproom is kicking off their month-long food drive supporting Ballard Food Bank. Throughout the month of December, customers who bring in 3 non-perishable donations for the food drive will receive 15% off of their beer/cider on-premise draft purchases.

Enjoy holiday shopping the best way this year – with a pint in your hand! The market will run from 12-6pm on Sunday, December 5th. Momo Express will be there starting at 1pm to serve delicious Asian street food. As a reminder, the Bale Breaker x Yonder Cider Taproom is requiring proof of vaccination for all eligible guests. For more details and vendor specifics, view the Facebook Event here.