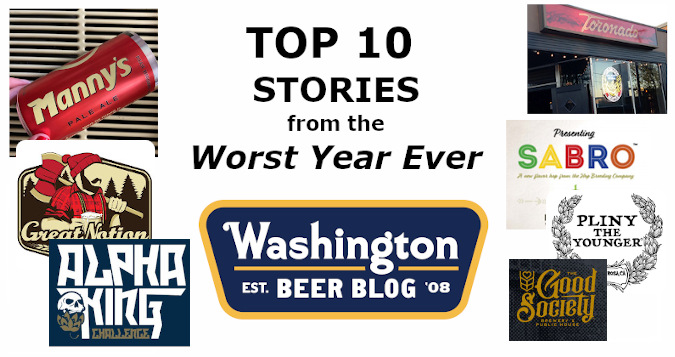 I typically wrap up the year with a retrospective of some sort. Most often it includes a listing of our top 10 most-viewed stories of the year. (Analytics programs help me figure that stuff out.) For 2020, I seriously considered skipping the whole thing because, as you’d imagine, the most-viewed stories on the Washington Beer Blog in 2020 were the ones directly related to you know what. I’m tired of talking about it.

Purists thought this would never happen, but Georgetown Brewing knows better than to use the word never. If they ever considered canning their flagship beer, which for years was Seattle’s most ubiquitous tap handle, they kept quiet about it. Then 2020 happened and Manny’s Pale Ale found its way into aluminum cans. Proceeds from the sales were donated to bar and restaurant workers impacted by the pandemic.

Disclosure: Although this was NOT our most-viewed story, it was one of them, and when combined with the follow-up story about how much money this project raised for local hospitality workers, well… This one deserves to be at the top of our list. In all, Georgetown Brewing raised $400,000!

This saddened people a lot more than I expected. I mean, I wasn’t sure anybody cared anymore, but it came in very near the top of our list, so apparently the news struck a chord. In May, Pyramid Brewing announced that it was permanently closing the Alehouse in Seattle. For over 30 years, it was a fixture on the Seattle beer scene. Why close? There are a number of reasons why, which are discussed in the story, but I don’t think anyone was shocked by the announcement, pandemic or not. It had been a big, sad, mostly empty building for years.

Not surprised to see this one come in so close to the top of the list. The Red Door, a beloved Seattle beer institution, opened in the city’s Fremont neighborhood back in 1988. It was one of the city’s first beer joints to fully support craft beer. It’s an understatement to say the neighborhood grew and changed around it. The announcement came in January when a certain word that I’m trying to avoid saying had not yet entered our common vocabulary. A few weeks after this announcement, the shit hit the fan and closing up shop probably seemed like a brilliant decision.

It was March. It was becoming clear that 2020 was going to present some, uh, challenges. That’s when Toronado Seattle announced it was closing permanently. It was founded in 2014 by Matt Bonney, an impresario on the local beer scene who passed away unexpectedly in March 2019. Matt’s passing, and some other uncontrollable factors, like an ongoing construction project that eliminated all street parking, led to the closing. Really sad.

In March, Governor Inslee signed a bill into law that allowed breweries to welcome dogs in their taprooms. It seems trivial in the grand scheme of things, but we’ll take it. Previously, the question of whether your pooch was allowed at a brewery taproom was dependent on a mishmash of different rules. Now the rules are clear; if a brewery wants to allow dogs, it can.

We must assume that all the plans were in the works (money laid out) long before the world flipped upside down. In late 2019, Great Notion Brewing, an Oregon-based company, announced it would open a taproom in Ballard. As we all waited for word that the plan was coming to fruition, Great Notion somewhat unexpectedly opened a new taproom across town in Georgetown last summer. It recently opened the Ballard location as well.

Right across the street from Stoup Brewing, Urban Family Brewing opened its new, beautiful brewery and taproom. It happened last February, just before the dumpster went up in flames. We were there for a sneak peek. This was one of several brewery and/or taproom openings that occurred right when things were about to get weird.

Like I said, some breweries opened right before the pandemic and then almost instantly got shut back down. Can you imagine? All that time and effort getting the beer flowing and the doors open, just to get shut down a few weeks later? That’s what happened at The Good Society Brewery and Public House in West Seattle. But they survived and in October of 2020 The Good Society was awarded a gold medal from the GABF and was also named Small Brewpub of the Year. That would be one hell of an accomplishment in any year. But in your first year? When that year is 2020? Dang!

9.5 Seattle, All Hale the Alpha King!

Hardcore beer nerds understand that the alpha acids in hops are in great part responsible for giving IPA and other hoppy creations the character we love. The annual Alpha King competition awards the coveted title to the most well-balanced and drinkable hop-forward beer in America. This year, the award went to Phil Pesheck, the head brewer at Seattle’s Burke-Gilman Brewing. For the unaware, trust me, this is a big deal. A very prestigious award and very worthy of our top 10 list.

10. Pliny the Younger Getting Bottled

About this time last year, Russian River Brewing announced that its uber-popular, much-ballyhooed Triple IPA was going into the bottle for the first time. We shared the story in January 2020. The release happened in February. Beyond that, I don’t know how it went. I don’t mess around with all those online beer-trading forums, but I can imagine the bottles were highly prized.

In conclusion, as strange and unfortunate as 2020 has been, one thing remains the same. It’s always been a constant across all 12 years of the Washington Beer Blog’s existence. Any story with the word Pliny in the headline is going to get more than its share of attention.