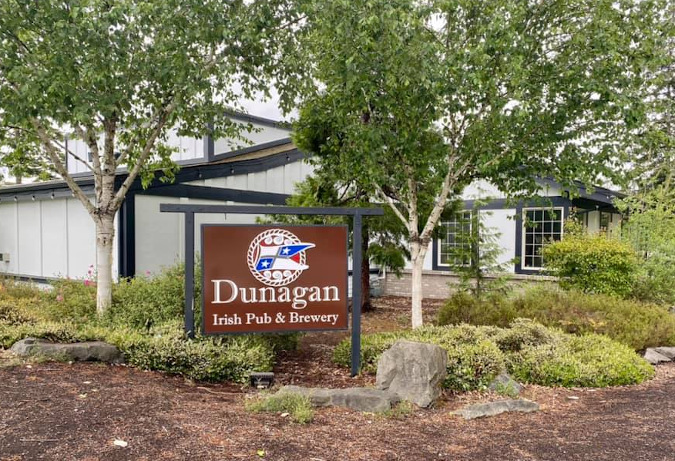 I recently spent some time talking with a friend who is a longtime beer industry veteran in New England. We were comparing notes on how our local breweries weathered the pandemic. Both of us expressed surprise (knock on wood) that so few breweries closed because of the pandemic. (Pictured above: Dunagan Irish Pub & Brewery, coming very soon to Gig Harbor.)

Perhaps even more surprising, a number of breweries opened during the pandemic, or very shortly before it, and still managed to thrive. Here in Washington, breweries like Bickersons Brewhouse, Logan Brewing, Good Society Brewery, and Otherlands Beer spring to mind immediately.

Today, I want to share some news from across Washington state about three breweries that opened recently. Also, one that is poised to open later this month. If there are others, please do not hesitate to let me know.

The taproom has 14 handles to pour the brewery’s beers, along with house-made hard seltzer and house-made root beer for the kids. The food menu centers around flatbreads, but offers more than that, including some specialty bratwursts and shareable plates. Garland Brew Werks is open Wednesday through Sunday. Check with Facebook for exact hours

Hops and Seed Brewery in Maltby

Part of the JM Cellars family (wine), Hops And Seed Brewery and taproom is located at The Vault in Maltby. Yes, the address says Snohomish, but it’s actually Maltby, which means it is quite close to Woodinville. The Vault is a single complex that houses six wineries (including JM Cellars), a distillery (J.P. Trodden), and now a brewery. In other words, at this brewery taproom, you can sample more than beer.

According to the company’s website, “We strive to keep a diverse selection of delicious, fresh, small-batch beers available to enjoy either alongside JM Cellars wine or all on their own.” The beer lineup currently includes a Kolsch, a Pilsner, a Blonde, an IPA, and a Pale Ale.

Five Dollar Ranch Brewing opened in early June. Walla Walla’s newest brewery is situated on 12 acres of farm property south of town, very near the state line. Dogs and kids are welcome. As for food, they serve a few snacks from local purveyors. Along with beer, they serve wine from the winery right next door, SuLei.

Not exactly new, but new to them and to us, Lumber House Brewery in Black Diamond has moved into a new location. It is in the same location, kind of, as the previous spot. It’s in the same complex, so it won’t be hard to find.

Slated to open at the end of August, Dunagan Irish Pub & Brewery is a proper brewpub. Not exactly new, but relocating from a much smaller spot in Tacoma. From what we’ve seen on social media, the place is going to be beautiful and unmistakeably Irish-themed, as the name asserts. The food sounds great too; who doesn’t love a Scotch egg?

The location is not far off of Highway 16 in Gig Harbor. Not too terribly far from the very original 7 Seas Brewing location, if you’ve been around long enough to remember that. The Washington Beer Blog hopes to get down there soon and check out Dunagan Irish Pub & Brewery. Stay tuned.

Use the comments below to share other news about new breweries or reach out to me directly.

2 thoughts on “New breweries, now open and on the horizon”