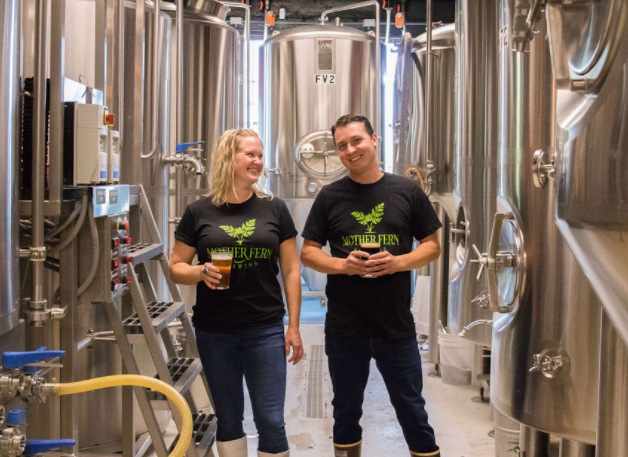 Not just a familiar location, but familiar names as well


Last Friday (Sept. 24th) was opening day at Mother Fern Brewing in Tacoma. The brewery is located at the former home of Pacific Brewing and Malting, which closed up shop a couple years ago (610 Pacific Ave., Tacoma WA). The taproom at the same location is open seven days a week. (Images borrowed from Instagram and the company’s website.)

As far as the beer at Mother Fern Brewing is concerned, Bethany Carlsen and Greer Hubbard (pictured at top), the owners/brewers, say they will not focus on flagship beers but will introduce new beers frequently. For the opening, they poured a Hazy IPA, a Schwartbier (black lager), a dry-hopped pilsner, and others.

If the brewers’ names sound familiar that’s because they are no strangers to the local brewery scene. Bethany Carlsen was a brewer at Pacific Brewing and Malting. Greer Hubbard worked with Odd Otter Brewing and with Northwest Brewing. In fact, Greg Steed, the owner of nearby Northwest Brewing, is also a partner in the new brewery.

Beyond the beer, the taproom also offers food: a limited menu focused tightly on mac and cheese. To provide the grub, Mother Fern Brewing partnered with The Gourmet Niche, a local catering company. For the taproom, Gourmet Niche created a “one-of-a-kind gourmet Macaroni and Cheese” that is available exclusively at the taproom. There are five variations of the dish, featuring add-ons like bacon, beef stroganoff, and more.

Here are the detailed coordinates for Mother Fern Brewing.

Family-friendly yes, but no dogs allowed thanks to the local health dept.

To see our reports about other recent Washington brewery openings, click here.