Teku Tavern opens in Seattle on Tuesday, October 18th near the intersection of 5th Avenue and Denny Way. Beer lovers should be excited about this one.

The new beer hall and bottleshop will offer 50 beers on tap, three cask stations, and a 29-cooler selection of beer, mead and cider in bottles. You’ll also be able to watch sports on television, with hours to support the biggest games. Teku Tavern will serve snacks alongside the beer and invite patrons to bring in food from local restaurants. 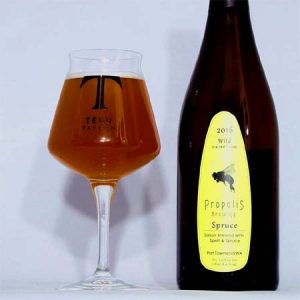 The tavern’s name is an indication of the owner’s beer-first philosophy. The Teku (sometimes spelled TeKu) is a specific type of beer glass designed by a sensory analyst and a top craft brewer for the specific purpose of improving the beer drinking experience. The Teku glass is widely recognized as one of the top beer glasses because of the way it enhances a beer’s flavor and aroma.

Owners Karrie Stewart and Rich Powell intend to introduce the city to an elevated, high-tech beer drinking experience but still provide a comfortable, friendly beer hall vibe. On the high tech side of things, they’ll serve each of the 50 draft beers through a custom-built, four-gas-blend system to ensures that each beer is poured at the right flow rate and carbonation level for its temperature.

A Digital Pour beer inventory system will display the availability (keg level) off each beer in real time so you’ll never miss an opportunity to get the last pint of the precious beer you’ve been hunting. Information about the availability of beers on tap and in the coolers will be available via table-top digital kiosks and on the tavern’s website.

“Being in Seattle, a tech and craft beer hub, it was important for us to integrate technologies like Digital Pour which do a great job enabling accessibility and understanding,” said Powell. “With a digital menu and inventory system, we’re able to organize offerings by flavor profile, then add more detailed descriptions for each beer, displaying all the information in real time. The same technology that helps make beer accessible to the novice beer drinker also helps the seasoned veteran find something new.”

Covering 3,700 square-feet, Teku Tavern will have plenty of space for large parties and private events. The tavern will host regularly scheduled brewer’s night events that will allow breweries to showcase their beers. They’ll also host classes covering various beer topics, such as beer-food pairings, and proper beer storage and aging practices. Along with that, tasting panels will highlight how things like serving temperature and glassware impact the flavors of a beer.

“We’re not only passionate about quality but almost more important to us is educating others, because that’s how we fell in love with craft beer,” said Powell. “Our appreciation for beer is more than just an enjoyment of what we’re drinking. We study it. We take time to break it down, learn the history, understand why we enjoy it, and we want others to feel that excitement too.”

Karrie Stewart, a former Flight Test Engineer for Boeing, and husband Rich Powell, a Product Manager for Amazon, developed their own passion and high standard for quality through years of attending lectures and beer education events from coast to coast. Both are Cicerone certified beer servers and Powell has received his Associates from The Siebel Institute in Brewing Technology.
“We’re committed to providing a large bottle selection where anyone can walk in and find something new or an old favorite,” said Stewart. “As well as serving each beer on tap through clean lines in the appropriate glassware to ensure the aromas and flavors are featured exactly how the brewer intended.”

The grand opening celebration is scheduled for Tuesday, October 18th. Use the hashtag #TekuTuesday.