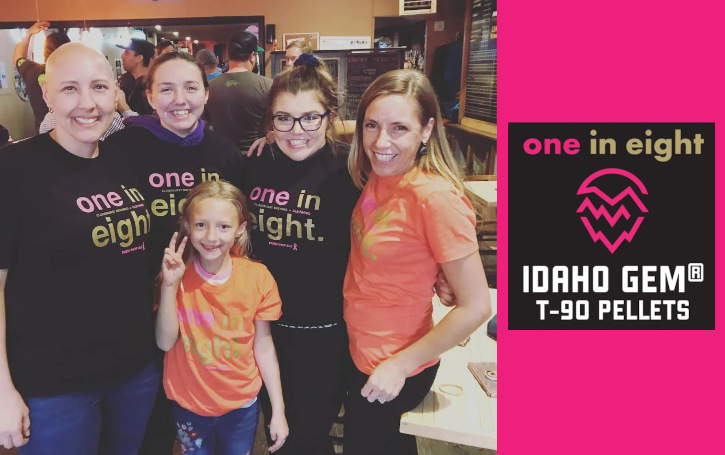 Last Friday, Georgetown Brewing released H.O.P.E. IPA, a beer brewed to support metastatic breast cancer research. The beer is out there now, at the Georgetown Brewing taproom in Seattle and at other locations, like Beveridge Place Pub, where you can support Breast Cancer Awareness Month by simply drinking beer. That is not the only way you can do so, and Georgetown Brewing is not alone in stepping up for the cause.

October is Breast Cancer Awareness Month. Breast cancer will directly affect one in eight women at some point in their lives: that’s the number of women who will receive the diagnosis. If you do not already, you will eventually know at least one person with breast cancer. Probably more.

The One in Eight campaign uses hops to raise awareness and funds for cancer care and support services. Started by CLS Farms in Moxee, Washington, the program has grown to include a number of other industry partners: Yakima Valley Hops, Brewers Supply Group, Gooding Farms, and a number of breweries across the country. Here in Washington the list of breweries currently includes Cloudburst Brewing and Icicle Brewing. Other brewers, including homebrewers, are encouraged to hop aboard.

Here’s how it works. Brewers create a beer using this year’s One in Eight hops, which they purchase from YakimaValleyHops.com. This year’s hop is a selected lot of Idaho Gem™, a popular new hop. Idaho is in the name, but this lot of hops was grown at CLS Farms in the Yakima Valley.

That’s pretty much it. Buy the hops, make a beer. The sales of the hops account for most of the funds raised, but One in Eight encourages brewers to use the beer to raise awareness and make a donation to local organizations, as Cloudburst Brewing and Icicle Brewing are doing.

“We were really excited to be a part of this year’s One in Eight brew showcasing Idaho Gem as a collab with Cloudburst Brewing, along with CLS Farms & Yakima Valley Hops,” says Pamela Brulotte, one of the owners of Icicle Brewing in Leavenworth. “We brewed a Summer Ale at Cloudburst in July and an Italian Pilsner at Icicle Brewing on October 8th that will be released in early November at our taproom and available in limited quantities statewide.”

Pamela’s connection to the One In Eight mission is heartfelt. “We will be donating locally to Wellness Place in Wenatchee which provides support and resources for individuals and their families facing cancer from diagnosis to survivorship. I sit on the Board of Wellness Place currently and they were a huge support as I faced my breast cancer journey in 2014-15. I’m so thankful to be cancer-free and to be a part of and support this effort to spread awareness of breast cancer that affects 1 in 8 women.”

“The hop and brewing communities are very passionate and giving, and the One in Eight campaign is just one way that we can help support the incredible work that Wellness House does here in town for those facing cancer,” said Jeff Perkins, Co-Founder of Yakima Valley Hops.

Last year’s hop variety was Triumph and more than $4 for every pound sold was donated to Wellness House, an organization providing support and services for cancer patients in the Yakima Valley.

“The One in Eight money was a much-needed financial infusion of operating money this past fall after 6+ months of nervously watching our bottom line. Thank you for caring for people in need, thank you for keeping our doors and phone lines open and thank you for bringing HOPE!” wrote Margaret S. Filkins, Executive Director Wellness House, in a thank you letter to those who supported the 2020 campaign.

Every pound of 2021 Idaho Gem sold on YakimaValleyHops.com means a donation to Wellness House. What each brewery decides to do to support their local organizations is above and beyond that. The fundraiser will go through the month of October.

Brewers, purchase hops here. Learn more about the One in Eight campaign here.