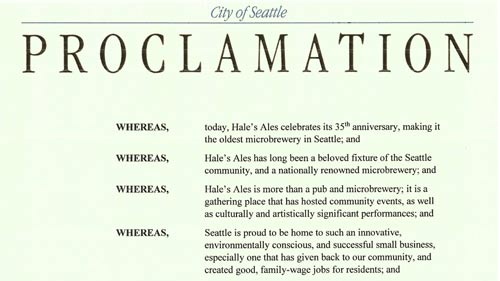 It is official. The City of Seattle has proclaimed this Saturday, July 28th Hale’s Ales Day! See the official proclamation signed by Mayor Durkan below.

Hale’s Ale Brewery is the oldest independent brewery in Washington*, having sold its first keg of beer on July 4, 1983. In fact, it ranks among the oldest breweries in the entire country. This Saturday, July 28th the company celebrates its 35th anniversary with a party at the brewery in Seattle from 1:00 P.M. – 6:00 P.M. 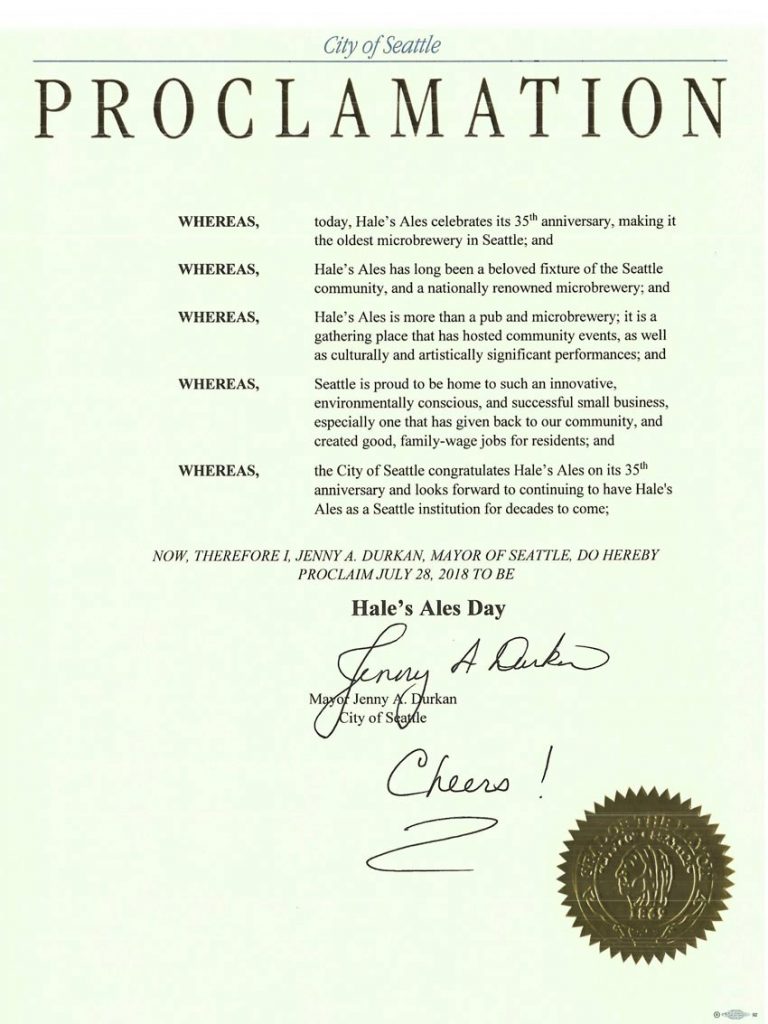 When Hale’s opened, there were fewer than 100 breweries in the U.S. and most of them were not what we could consider “craft breweries.” Hale’s was just the twelfth brewery to receive a license from the federal government after Prohibition was lifted in 1933. Presumably, most of the big breweries held onto their licenses through those long, dry years.

Today we take our robust craft beer culture for granted. We live in an America that is home to over 6,000 breweries, the vast majority of which are independent, craft breweries. These days the idea of opening a brewery is a pretty common thing. People do that. Back in 1983, it was unheard of. You had to be a visionary of some sort to even consider such a thing. For Mike Hale, the vision came in 1982 while visiting England where he enjoyed traditional English pubs and ales.

Mike Hale’s original brewery was located in Colville, Washington, in case you were unaware, and was quite diminutive by today’s standards. It was fashioned out of repurposed dairy equipment. Humble beginnings, yes, but growth was inevitable as people began to discover that beer could be something more than the light, watery, fizzy stuff that the vast majority of American breweries produced in those days.

The brewery’s flagship beer, Hale’s Pale Ale, was the Northwest’s original pale ale. Back in the 80s, with the help of the legendary Don Younger of Portland’s celebrated Horse Brass Pub, Hale’s was the first Northwest brewery to offer traditional, hand-pumped, cask-conditioned ales, the kind that Mike Hale had enjoyed in England. Some years later, working in collaboration with the retired head brewer of Guinness Brewery, Hale’s became the first brewery to bring nitrogen-conditioned beers to the American market.

Slowly over the coming decades, Hale’s Ale Brewery would move west from Colville to Spokane to Kirkland and eventually to its current home in Seattle’s Fremont neighborhood.

“We continue to make innovation a priority,” says Hale, speaking about the brewery’s Leary Way Limited IPA Series, its robust barrel-aging program, the introduction of pilsners and lagers to the brewery’s lineup, and the continued exploration of seasonal beer styles. Hale’s recently launched an extensive rebrand, rolling out a new website, new packaging, and new label designs.

To honor the brewing community that has supported Hale’s for the past 35 years, the brewery is hosting a blow-out party on Saturday, July 28 from 1:00 – 6:00. The beer-loving public is welcome at the event.

– Raffles, good eats and shout-outs to our many long standing industry friends

– $1 per pint sold to benefit CityFruit , whose mission is to promote the cultivation of
urban fruit in order to nourish people, build community, and protect the climate . To
learn more about CityFruit, visit www.cityfruit.org.

*Redhook Ale Brewery opened before Hale’s, but Redhook does not qualify as independent and is part of a larger company. Also, there was a short period of time when Redhook was not brewing beer in Washington.

1 thought on “City of Seattle proclaims this Saturday to be Hale’s Ales Day!”