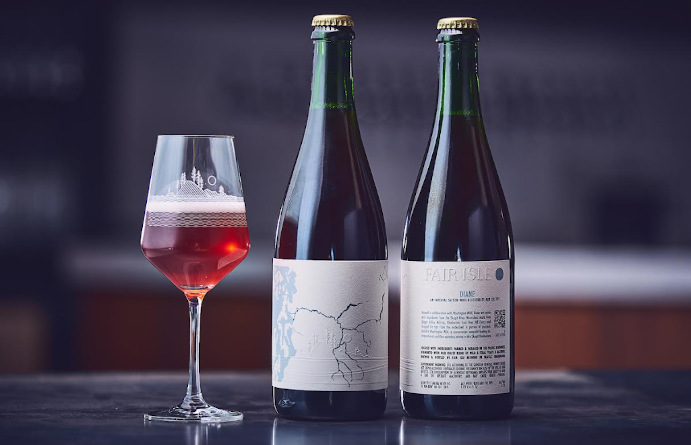 The headwaters of the Skagit River lie in the mountains of British Columbia. Ultimately, that is the source of the river’s bounty. Fair Isle Brewing recently teamed up with other members of the Washington Brewshed® Alliance to create a beer that celebrates the bounty of the Skagit River.

Today, at its taproom in Seattle, Fair Isle Brewing releases Diane, an Imperial Saison. The beer was created to draw attention to an important issue and support efforts to Save the Skagit.

Currently, officials in British Columbia are considering permits that would allow Imperial Metals Corporation to establish mining operations near the Skagit River headwaters. What could possibly go wrong? Well, to answer that question, opponents to the current proposal ask you to consider the Mount Polly disaster of 2014. That event saw one of Imperial Metals’ mining operations spill more than 2.6 billion gallons of toxic sludge into the Fraser River watershed. It was one of the largest environmental disasters in Canadian history.

Fair Isle Brewing is a member of the Washington Brewshed Alliance, a coalition of beer industry partners focused on protecting the state’s wildlands and the water sources used to make great beer. Other Brewshed Alliance members involved in the creation of this beer include Skagit Valley Malting and Yakima Chief Hops.

Here is the press release from Washington Wild about the beer, the proposed mining operation, and more

SEATTLE, WA – Fair Isle Brewing and statewide conservation nonprofit release a unique collaboration beer on October 27 at the Fair Isle taproom in Ballard.   The Imperial Saison, named Diane, was brewed in opposition to a pending mining permit by Imperial Metals Corporation in the headwaters of the Skagit River in British Columbia.  The beer showcases the agricultural bounty of the Skagit Valley region, which is at risk if a mining disaster were to occur upstream.

This beer showcases some of the best of what the Skagit Valley region has to offer through thoughtfully selected ingredients, all of which rely on the Skagit River’s clean water. Skagit Valley Malting, a Washington Brewshed® Alliance member, donated barley representative of the terroir of two important geographic locations: 50% of the malt was grown in the Skagit Valley near their malthouse, and 50% was grown in the Fraser Valley in BC near the Skagit headwaters.  Locally sourced blueberries from Bow Hill Farm add a fruity character and distinctive pink hue. As the brewing process continued, conifer tips foraged from a farm in Mount Vernon overlooking the Skagit River were added. The forage day was hosted by Diane and Mark Studley and brought together team members from Washington Wild, Fair Isle, Skagit Valley Malting, and Yakima Chief Hops.

“Washington state is world-renowned for our high-quality craft beers. This is because brewers have locally produced ingredients to work with and incredible mountain water to use as the base for their brews” says Chris Chappell, Conservation & Brewshed® Program Manager at Washington Wild “It is crucial that Premier Horgan and the BC Provincial Government deny the mining permit to Imperial Metals to protect the downstream Washington communities from ecological disaster.”

The Skagit River begins in British Columbia but quickly crosses the Washington border, flowing through the scenic North Cascades National Park, the Mt. Baker Snoqualmie National Forest and through the renowned Skagit River Valley agricultural hub before reaching the Puget Sound, where it provides 30% of the sound’s freshwater. Downstream communities in Washington state depend on a healthy Skagit watershed.  The mighty Skagit also supports the largest populations of threatened steelhead and chinook salmon in the Puget Sound and the largest run of chum salmon in the conterminous U.S.

Since March of 2019, when Imperial Metals filed its request for a mining exploration permit from the B.C. Ministry of Mines, more than 50 media stories from British Columbia and Washington State have focused on this controversial proposal. To date, more than 6,000 individuals have sent letters or emails to the British Columbia government and other entities opposing the granting of the mining exploration permit. The growing opposition has manifested into an international coalition of more than 290 conservation recreation and wildlife groups as well as local elected officials, businesses, and Tribes and First Nations who have formally opposed the proposed mining permit in the Skagit Headwaters.

The company proposing to mine in an unprotected area of the Skagit Headwaters, Imperial Metals, was responsible for the infamous Mount Polley mine disaster of 2014, which spilled more than 2.6 billion gallons of toxic sludge into the Fraser River watershed, one of the biggest environmental disasters in Canadian history. The proposed mining exploration activities in the Skagit Headwaters include creating access roads, conducting surface exploration drilling with associated water supply and catchment sumps, and mechanical trenching over a five-year period of continued disturbance.

The Skagit headwaters of British Columbia are made up of lush forests and clean clear water, which support an impressive diversity of fish and wildlife, including an important run of chinook salmon. The Skagit River is well-loved for its high-quality rainbow trout fly fishing opportunities. Wilderness habitats within the Skagit headwaters are required to recover B.C.’s North Cascade population of grizzly bears — the priority grizzly population for recovery in the province. More than 200 species of birds have been documented here, and the area contains important forest habitat for the endangered northern spotted owl.

In 1984, a treaty was signed between the City of Seattle (U.S.) and the British Columbia (Canada) governments to resolve disputes over Ross Dam and to maintain the environmental integrity of the Skagit Watershed. In addition, it created the Skagit Environmental Endowment Commission (SEEC) to administer this collaborative partnership. Both governments established SEEC’s primary mission: (1) To conserve and protect wilderness and wildlife habitat, (2) To enhance recreational opportunities in the Skagit, and (3) To acquire mineral or timber rights consistent with conservation and recreational objectives. The letter argues that the proposed logging and mining in the “donut hole” is inconsistent with the spirit and intent of the 1984 treaty. It will have significant impact on the wilderness, wildlife habitat, and fishery resources of the Upper Skagit River.