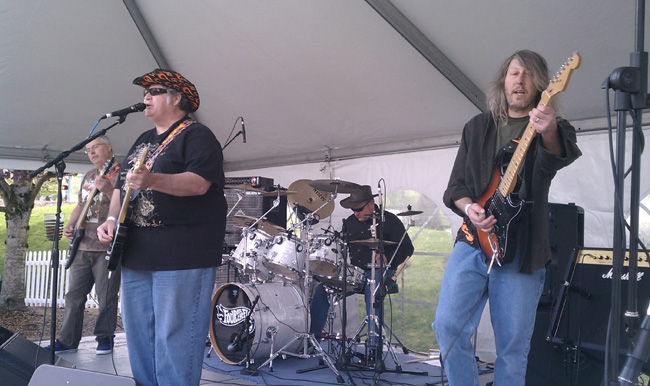 Admittedly, this is a bit tangential for a beer blog, but I like hearing and seeing live music at breweries. Music and beer happen to be two of my greatest passions. In addition to writing this blog, I perform in a classic rock cover band, Four on the Floor. Some of you may have seen us perform at any number of local breweries over the past few years, or maybe even at last summer’s Washington Brewers Festival. It’s great fun, but there’s a problem.

Organizations like ASCAP (the American Society of Composers, Authors and Publishers) and BMI (Broadcast Music Inc.) behave like extortion artists. If they had their way, bands like mine would not be able to perform at breweries and pubs.

Why? Because these organizations say the breweries, bars and clubs where we perform need to pay an exorbitant fee for the rights to the songs we play. In many cases they don’t even own the rights to the songs we’re playing or represent the artists that do, but that doesn’t matter. They do it anyway and there’s no stopping them. Stupid, outdated laws grant them the legal right to act like goombahs. One local brewery just contacted me and said that they had to cancel their open mic night because they were threatened by one such organization.

There is legislation in the works to change this. If you know what I’m talking about, you can pledge your support here. Otherwise, read on.

I’m an artist and an author. I understand the need to protect my stuff, but that’s not what this is about. BMI and ASCAP are not protecting my intellectual property. They could give a rat’s ass about my rights as an artist. This is not about protecting my art, it is about them reaping profits off of the hard work of songwriters and authors at the expense of bars, clubs and breweries.

It’s a sham. It’s a joke. It’s disgusting. Something must be done. ANY small business owner who’s dealt with an ASCAP or BMI representative probably knows what I mean. It’s like getting a visit from the mafia. “We’d hate to see any unfortunate incidents befall you or your brewery.”

Given what I just said about these organizations behaving like the Khmer Rouge, I will not mention the name of the brewery that contacted me. But here’s some of what they said, just to make you understand the problem:

“The number of cover songs actually played is not important. The number of people hearing the songs (attending the party or open mic) is unimportant, because they go by max occupancy of business. If you do a live event once a year, they bill you as if you’re doing it once a week. Why? Because it isn’t about fair, it’s about what congress has allowed them to get away with under the cover of protecting musician’s royalties.”

“Since there are multiple companies who collect royalties for musicians, they all jump in to collect money with their individual contracts. The artists performing [at the brewery or bar] may never play a song that BMI or ASCAP own the royalties for, but they charge none the less. Oh, and don’t dance… that is extra. And if you charge a cover, they want some of that too.”

About the legislation that will change this disturbing status quo:

In January, state legislators will convene in Olympia. There is a bill that aims to change things. It needs your support.

HB 1763 will force BMI, ASCAP, and other music licensing agencies to treat business owners like yourself with respect. It will ensure they give notice when they are on your premises, disallow them from making threats or bullying business owners, and require them to pay a fee to operate in Washington State.

The fee will be used by the state to communicate with business owners about their rights when dealing with BMI and ASCAP. HB 1763 will not in any way prohibit BMI and ASCAP from collecting royalty money when they rightfully own the music and can charge for its usage as is guaranteed under federal law. But, this legislation will greatly improve how they interact with business owners.

We need your help to get this legislation passed for fair treatment of small business owners in our state.

You can pledge your support by filling out this very, very short survey.

I thank you for indulging me on this barely beer-related topic.

4 thoughts on “Do You Like Live Music at Breweries?”