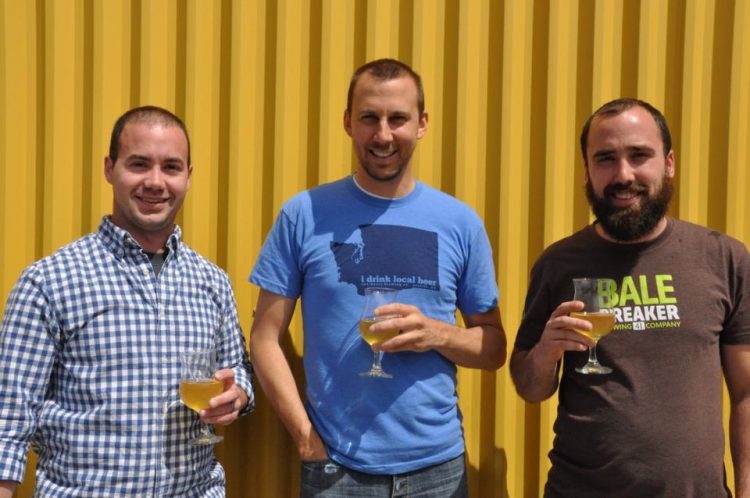 The U.S Congress is currently considering a measure that would benefit and boost the cider industry. If enacted, the CIDER Act would benefit both cider producers and consumers. The easiest way to describe the CIDER Act is to say that it aims to normalize federal taxes on cider makers. There’s a lot more too it than that, though. In this case, CIDER is an acronym for Cider, Investment & Development through Excise Tax Reduction Act. (Pictured at right: Eric Willard, Joel Vandenbrink, and Brent Miles of Seattle Cider Company.)

The CIDER Act focuses on redefining some of the federal tax codes as they apply to cider makers. Currently, cider is taxed at the same rate as beer. But there’s a catch. If a cider is over seven percent ABV, the producer is taxed at a higher rate—the wine rate, which is five times higher. If they carbonate their product beyond a certain level, they pay an even higher rate—the Champagne rate, which is at least ten times higher. We are talking about federal excise tax, not the state excise tax.

The Act is not just about reducing and normalizing tax rates for producers, it also impact consumers. It’s about giving people what they want without charging them more. “The CIDER Act would allow us to carbonate our ciders in line with consumer expectations,” said Brent Miles, operations manager at Seattle Cider Company. “This would give us more flexibility to create slightly higher ABV products without having them pushed into a higher tax bracket, which ultimately makes them more expensive for the consumer.”

The United State Association of Cider Makers (USACM) is an organization of cider and perry producers in the United States. It gathers and shares information about cider production, cider regulations, and cider apple growing, to help members improve their operations, raise awareness, and advance cider in the market. The organization was founded just about one year ago by a gathering of cider producers from across the country.

Here is a statement from the USACM about this matter:

Under current federal tax law, the definition of hard cider ($0.226/gallon) only allows for up to 7% alcohol by volume before it is taxed as wine ($1.07/gallon), and only a certain level of carbonation before it is subject to the expensive champagne tax ($2.60 or $3.40/gallon).

Because many cider producers are small, craft operators, who rely on natural raw materials, they often have little ability to predict and control the precise alcohol content and carbonation level of their product. Meanwhile, cider consumers expect a somewhat high level of carbonation, equivalent to that of most beer.

The Blumenauer-Collins bill would amend the section of the Internal Revenue Code (26 USC Section 5041) to allow cider makers to produce cider using the natural products available without the possibility of facing increased tax liability. Specifically, the legislation would (1) increase the carbonation level for hard cider, thereby meeting customer expectations, (2) include pears in the definition of “hard cider,” and (3) align the alcohol-content standard for hard cider with the natural sugar content of apples.