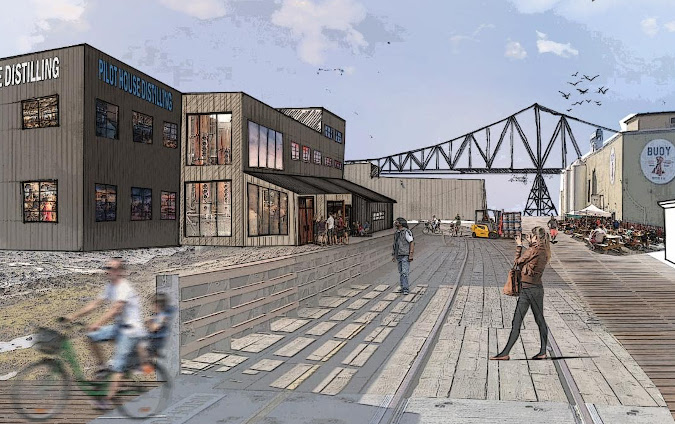 If you’ve beer toured in Astoria, Oregon in the last six years, you’ve probably stopped in at Buoy Beer Company. Located on the city’s working riverfront, the Riverwalk, the seals and sea lions bark beneath the pier and huge ships navigate up and down the river impossibly close to shore. It’s pretty cool. (See our most recent story about beer touring in Astoria.)

Bouy Beer Company just announced some exciting expansion plans. Partnering with their sister company, Pilot House Distilling, the project will see the distillery move to a new permanent home on the waterfront in a building adjacent to Buoy Beer’s location. They’ll also expand beer production to the Astor Street building that housed the Beer Hall this past summer, just across from the existing Bouy Beer facility.

Here is the press release with more details:

Since they were established, Buoy Beer and Pilot House Distilling have been growing and looking to the future. Besides satiating thirsty customers, top priorities of the business have always included creating jobs and boosting the local economy. Buoy has been in a constant state of expansion and Pilot House has long awaited to increase production with top-of-the-line equipment. When the two companies joined forces in 2019, there was not only a synergy between them, but a shared vision of creating an unbeatable destination on the Riverwalk in their hometown of Astoria.

“Like everyone, 2020 has been a really hard year for us,” says Cofounder David Kroening. “We had just finished up years of work on our strategic plan and then everything got turned on its head when the pandemic started. We lost a lot of our staff during the first shutdown and had to pump the brakes hard as we dealt with the toughest months we have ever faced. After some really hard work from our entire team, we were able to make the decision that with some tweaks to our plan, focusing growth on our core areas was going to be the best path for us to make sure we’d be able to expand our team again into the future and meet the ever-growing demand for our beer and spirits.”

Currently the Pilot House Distilling facility resides in a 4,000 sq. ft. section on the backside of the Liberty Theater building with a tasting room on Duane St. Plans are to move the distillery to its permanent home on the waterfront in a former fish processing plant adjacent to Buoy Beer. The new distilling facility will include a new 5,000-liter copper pot still and column (a significant upgrade from the current 950-liter still), a new fermentation cellar with a mash mixer and a mash filter, and a 12,000 sq. ft. second floor devoted to barrel aging. Relocation and the new equipment will allow the team to ramp up production on Pacific Northwest favorites like Painted Lady Gin and Diablo Azul agave spirits, as well as expand the whisky and bourbon lines with grain-to-glass fluidity.

“I am very excited about the opportunity to expand into a state-of-the-art production facility,” says Larry Cary, Head Distiller of Pilot House Distilling. “This will give us the opportunity to compete on a national level by giving us the tools needed to increase our production capacity. We’ll have better access to the raw materials needed to further increase the quality of already award-winning products.”

Visitors to Astoria’s Riverwalk will not only have breathtaking views of the Columbia River, but also the 24′ tall copper column through full height glass walls leading people to sample the products at the new Pilot House Distilling tasting room. The tasting room will feature not only tastings and bottle sales, but also a 21-and-up bar to enjoy hand-crafted cocktails and views of a working distillery in an intimate setting on the back dock over the water. The facility also has plans to set up private tours of the distillery and brewery. The tours will offer education on the processes of grain-to-glass production, equipment, and more.

On the north side of the building along the Riverwalk, the chefs from the Buoy Beer’s restaurant will start a new walk-up “take & go” food option that will continue to feature local seafood to compliment the cocktail bar. The offerings will include items like freshly shucked oysters, tacos, and specialty toasts while accommodating vegan/vegetarian options. The outdoor area will also have some Riverwalk seating with beautiful views.

Buoy Beer Company will expand their beer production into the Astor Street building that housed the Beer Hall this past summer. Construction will “pop up” the roof to accommodate the fermentation tanks while keeping the iconic wave on the front of the building intact. This additional building will house a new 50bbl 4-vessel brewhouse along with more fermentation tanks to support demand throughout the Northwest. However, beer production will not leave the old Bornstein Cannery; a pipe bridge will be installed between the Astor building and the current brewery where the lager tanks, bright tanks, kegging lines, and new higher-speed canning line will be installed. Pipe bridges will also carry wastewater from the brewery and distillery to the brewery’s own treatment facility that will process the water before it enters the city’s wastewater system.

Since opening in 2014, the brewery has increased production often but continues to encounter even higher demand from customers. For the past 6+ years, Buoy has been available mostly in Oregon and small areas of Washington, however, two months ago, Buoy Beer & Pilot House started their own distribution company to expand their presence in Seattle, Olympia, Tacoma, and SW Washington. This production expansion will more than double Buoy’s capacity over the next 5 years. Hopes are to satisfy the current portfolio demand of the market and expand specialty beer releases, barrel/foeder projects, and seasonal lines while continuing to make better balanced beer. The QA/QC department will grow along with the brewery to ensure the output of not only more beer, but better beer that is brewed with the ethos of Astoria.

“It’s very humbling to look back at how far we’ve come in the past 7 years,” says Kevin Shaw, Director of Brewery Operations. “I had faith in the project when I came on board in 2013 but this exceeds my wildest dreams for the company. Being able to increase production to fulfill orders while continuing our consistency and quality is really exciting plus… who doesn’t like shiny new things?”

Although 2021 will bring on a tidal wave of change, the team has already begun looking towards the implementation of a second wave of development of their Riverwalk campus. The next step for the Pilot House Distilling building includes an additional upscale seafood restaurant on the second floor northeast corner, where patrons will get a 270-degree view of the Columbia River, tongue point, and all of historic Astoria (including the column). The Buoy Beer restaurant plans to add additional space that expands the entire river view side and on the second story and in the future develop a large second story event space to host future weddings, events, and meetings (once pandemic restrictions are lifted). There are also plans in the works to continue the company’s sustainability efforts with expanded CO2 recovery, growth of its roof top solar array, electric vehicle charging stations, rooftop beehives and herb gardens and many other possibilities.

These next big steps for both brands reflect the Pacific Northwest’s love of hand-crafted, quality beers and spirits. Excitement is high within the company and the entire team is anxious to bring their customers more of the experiences they have loved over the past 6 years.

Astoria, OR overlooks the meeting of one of the West’s most relentless rivers and the wilderness of an entire ocean – and it’s here that Buoy Beer Company brews its beer. With balance always a priority, we focus on traditional lagers and NW ales to savor after a hard day’s work and to share with friends.