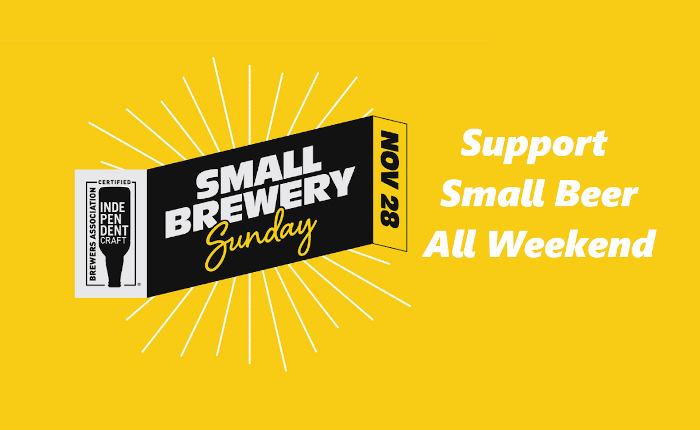 This Sunday is Small Brewery Sunday. Actually, since Saturday is Small Business Saturday, and many beer-related businesses also have stuff planned for Friday, think of this entire weekend as an excuse to support your local, small brewery. Like you need a reason, right? You don’t need to know exactly what to do, or where to go, just get out there and support small breweries and small beer-related businesses. Scour social media. Check-in on your fave local bottleshop or brewery. Whatever. Just get out there show ’em some love this weekend.

To whet your whistle, to get you in the mood, to give you ideas, I share some info that I’ve found about special happenings this weekend. Most of the info below is straight from the horse’s mouth, as I found it in emails and/or on social media. If you know of something else going on, please feel free to share it in the comments (though your comment cannot include links).

We have a special day planned for this Saturday, November 27th, Small Business Saturday! Our 2021 bottles of Three Ryes Men and our Taproom-exclusive variant Three Ryes Men: Pecan Pie will both be available beginning at 11am online and at the Taproom.

Three Ryes Men is our US Beer Tasting Championship Grand National Champion, Craft Beer & Brewing Top 20 of 2020, FoBAB Silver-winning, and GABF Bronze-medalist barrel-aged barleywine. One of our favorite beer releases of the year, we’re very excited to share this year’s batch with you all. Three Ryes Men is a barleywine brewed with multiple types of rye and aged in whiskey barrels, featuring a full body with malt driven caramel and chocolate notes, and layers of warming complexity. Our co-founder Adam describes this beer as a liquified rolo!

Three Ryes Men: Pecan Pie is our 2021 variant release of Three Ryes Men. This barrel-aged barleywine is brewed with three kinds of rye malt with additions of roasted pecans and vanilla bean. This homage to a classic American pie amps up the notes of caramel and chocolate of our GABF-winning Three Ryes Men.

Three Ryes Men bottles will be in limited distribution around the PNW beginning next week, but Pecan Pie will be available at the Taproom only.

Over in Yakima, Single Hill Brewing has events planned on Friday, Saturday, and Sunday. A special, barrel-aged beer release. A shopping opportunity with local makers and vendors. A chance to get your family photos take care of, and more. Visit Single Hill Brewing on Facebook or Instagram to find out what’s going on.

Yoked Farmhouse Brewery, located on a real farm near Port Orchard, celebrates its anniversary all weekend. Here’s what they’ve planned.

Join Us on Dark Beer Friday…on Black Friday!! We will be tapping special dark beers – new and from our cellar to enjoy! Join us for a pint or a flight! Plus, we will have Black Friday & Small Business Saturday Gift Card Specials! Give the gift of BEER MONEY this holiday!! Our specials will let your gift-giving to go farther! Find out more on Instagram.

THERE’S NO SUCH THING AS SEAGULLS, OLIVER. (Season 2) is an American wild ale aged in Washington wine barrels for two years, then blended and re-fermented in stainless on a blend of Syrah (60%), Cabernet Sauvignon (38%) & Petite Bordeaux (2%) grapes (juice & skins) from our friends at Discovery Vineyard (Horse Heaven Hills AVA, Paterson, WA). The beer is complex but friendly with intense berry flavors and funky wild yeast character. We did not sulfite the grapes, which received a light crush to reduce tannins from seeds. This season’s blend is our favorite version so far, and we hope that you also enjoy it.

Both beers will be available on draft & in bottles this Friday when we open at 2pm. Bottles will also be available for shipping within Washington state starting next week

Black Friday at Wander = bourbon barrel-aged goodness. Today our team is thrilled to share our decadent 2021 Vanilla Emissary Imperial Stout with all of you. A year in the making, the 2021 release spent a long slumber in @woodinvillewhiskeyco bourbon barrels followed by an addition of whole organic highly aromatic Madagascar vanilla beans. Yes, we even upped the vanilla this year. Because why not. Vanilla make us happy. Rich dark oaky roasty vanilla bourbon layers of goodness with each sip. This beer feels like the winter holidays to our team and we hope you enjoy sharing it as much as we do. Don’t forget to balance your weekend with some tasty eats. @newpublicfoodtruck slinging the good stuff on the patio both Friday and Saturday. Doors open at noon all weekend!

Don’t be fooled by the free pallets and old downspouts at the end of the driveway, those are for the nice, old hoarder that lives down the road. For the gluten obsessed, there’s a funky, little farmhouse brewery that will sell you bottled and canned beers to go (and maybe merchandise, sometime between now and Christmas).

Order online for pickup at the brewery this #smallbusinesssaturday 11/27 and #smallbrewerysunday 11/28 between 12pm-3pm. After that, you can do it EVERY Saturday until Christmas. Following that, we’ll take a break from Barnside Pickup while you lie to yourself about how you’re not going to drink beer anymore. #untillatejanuary

Use the comments section below to share what you know. Remember, and I apologize, but your comments cannot include hyperlinks.