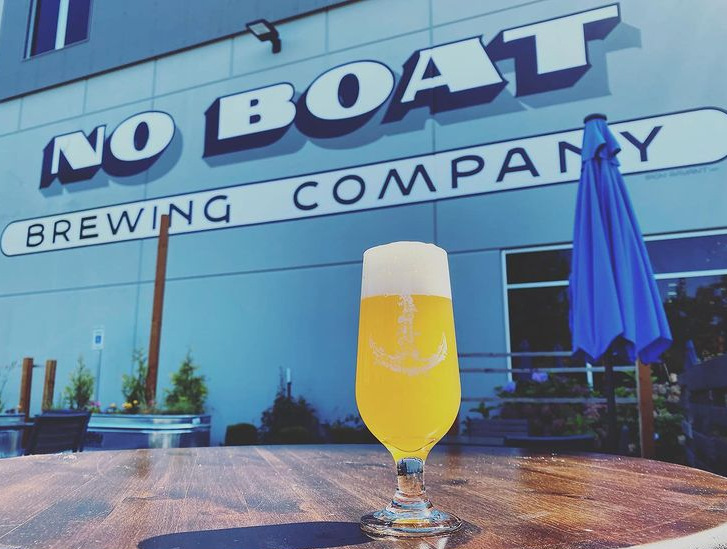 October 25 thru October 31 at No Boat Brewing

When properly executed, a brewery’s taproom creates a community gathering space. Not just a place to drink beer, but a place to relax, meet neighbors, and make friends. It did not take long for No Boat Brewing to become the darling of the Snoqualmie Ridge community when the brewery and taproom opened five years ago. The locals were starving for something to add character, personality, and beer to the neighborhood. That’s exactly what No Boat provided. (Photo above from Instagram.)

No Boat Brewing plans to commemorate its fifth trip around the sun with a week’s worth of happenings at the brewery. Below, I share the info. Like a lot of businesses, by its own choice and ahead of the countywide mandate, No Boat Brewing has implemented a vax requirement. Proof of vax or negative test required. And, of course, you’ll need to present a valid form ID to prove you are who you say you are.

Friends, the time has arrived for us to celebrate our humble brewery’s fifth turn around the Sun. We are, frankly, just as shocked as you at how much time has passed since we first opened our doors, but also, amazed at how fast it’s gone. Truly, we could not have survived these past months without the love and support of all of you, and as such, we are going to throw a whole week of superior parties for you! More details will emerge, as well.

Monday, 10/25 – Seahawks vs. Saints on MNF. Come watch Geno Smith do the best a man can do in overwhelming circumstances against a Drew Brees-less Saints team! A No Boat debut for Tacos El Güero food truck too!

10/26 – MARKET DAY – For the first time ever, we will have a farm stand. We’ll have fresh produce, glassworks, jewelry, and more! Burger Planet food truck will be slanging their awesome patties.

10/28 – Trivia Night! That’s right, the Scott’s, after 20 months away, are going to be back at it with a super special trivia round and crazy prizes! Swift & Savory will be dropping a rad menu.

10/29 – Live Music at night with the incredible Sonny Billy Glover and His Band. We love these guys whenever we can get them in town and they’ll definitely blow you away! Snag some dope Whateketruck
burritos, too!

10/30 – Nacho Mama serves their last shift, ever, so we’ll be throwing them out in style with a special collaboration lager releasing in cans and draft. Chris and Sandra will be in their rarest of forms, we’re sure!

10/31 – Seahawks vs. Jaguars at 1PM. We’ll watch some football, and then close a little early so we can all catch up on sleep after what looks to be a crazy week for all of us at No Boat. Mexicuban food truck on deck to finish the week off!

As a reminder, proof of vaccination will be required for all those attending! Thanks so much, and please be patient if we’re especially busy throughout the week. Love and beer – Us.