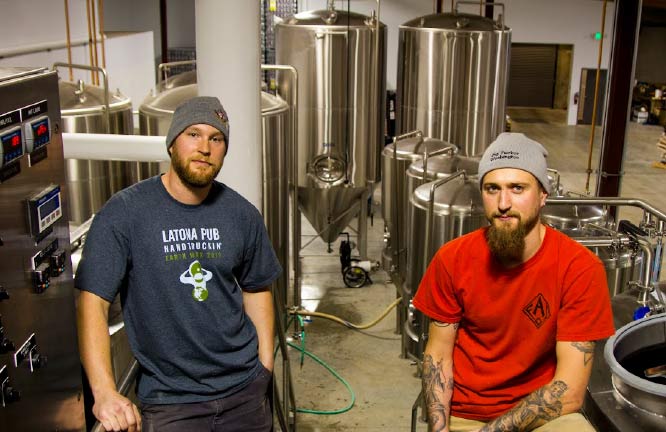 We recently contacted Mike and Travis at Gig Harbor’s burgeoning 7 Seas Brewing Company to get an update.

“At the moment there isn’t a whole lot of new developments,” Travis told us. “The warehouse is under remodel and we’re finishing the permitting process with the city.”

They have realistic expectations and hope to introduce their product by the first of the year. From talking to other beer geeks, it seems that there isn’t a real big buzz about 7 Seas yet.  So, for those of you who have not yet heard…

Travis Guterson and Mike Runion are opening a brewery in Gig Harbor. The two met while working at Silver City Brewing in Silverdale. They decided that they wanted to give it a whirl on their own. Initially, they will only have a brewery. No pub. Who knows what the future holds.

Things are moving along at a predictable speed. “There are miles of red tape to work through,” says Mike. “Everything is coming along great and we’ll keep you posted.”

When they go live, they will offer a flagship amber ale, a British-style pale ale, and a double IPA. 7 Seas intends to distinguish itself not only by creating quality beer, but also by being the first Washington craft brewery to put their product in cans. Although it requires a substantial upfront investment, Mike and Travis are committed to the can for a number of reasons. They like the eco-friendly aspect of aluminum cans, which consist of 70% recycled material. They also like the benefits from a quality assurance perspective. No harmful U.V. rays get to the beer. As if that isn’t enough, it also makes a nice slogan: “No broken glass, no heavy trash.”

If you have yet to warmed up to the idea of good, craft beer in a can, get over it. Seriously. If you think it’s a bad idea, you’re wrong. Let go of your preconceptions. The earth is round like a baseball, not flat like a pizza pie.

To actually brew the beer, Guterson and Runion got their hands on the brewing system that Tom Munoz used at Stix—the now-closed “billiards and brew pub” on Lake Union. The gear is currently in storage while 7 Seas finishes building the brew house.

Of course, this wouldn’t be a proper Washington beer story unless it involved some sort of an incestuous twist. Tom Munoz is now working with his old pal Don Spencer at Silver City (where Travis and Mike used to work). So when the boys from 7 Seas went looking for a brewing system,  they didn’t have to look very hard.

3 thoughts on “7 Seas Brewing Gets Closer to Setting Sail”